This grave was not located by the CFHS 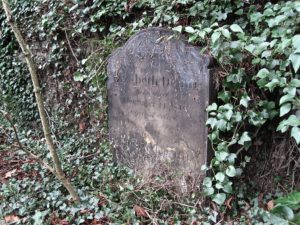 Joseph Turner Bailey is buried to the left of this grave which is located against the west wall. St Andrew the Great Row 1 Grave 3. (This grave has no monument but was identified using the sexton’s grave record)

He was born to George and Sarah Bailey of Russell Street, Cambridge. He had an older brother William and a younger brother Alfred, who died in infancy. After leaving school Joseph went to work at Bacons the tobacconist in Market Street. He also took an elderly lady out in her bath chair. When she died in 1875 she left Joseph £300. He used this money to buy a public house,  The Earl of Beaconsfield on Mill Road, and houses (at least 56) in the Mill Road area.

Joseph married Susan Brocket in 1878. Sadly Susan died in 1890 at33 years of age.
They had no children. Joseph became quite a wealthy man and was known to be a little eccentric.  He used to collect brooches containing crown pieces which he used to pay for large items. This article was written by someone who knew him as a child.  Earl of Beaconsfield History – research Stephen Thompson copy

When he died in 1917 Joseph left the Earl of Beaconsfield to Stephen Thompson, who had been a friend and employee for many years. Stephen was also left most of JTB’s  many properties for his lifetime and afterwards to Addenbrooks Hospital, Cambridge.

A few months after his death Joseph’s brother William contested the will claiming that he had been promised a half share in the money left to Joseph by Mrs Rickards. A court case ensued which was reported in the paper (see sources). The headline read.

It is not known why Joseph was not buried with his wife and mother.

His benefactor Susanna Rickards‘  grave is not far from his, one row to the east. His father is buried in the parish of St Paul. (not yet located)