Mary Ann was born in Phocle Green in Herefordshire – a small hamlet between Ross-on-Wye and Upton Bishop.  She was the daughter of agricultural labourer Thomas Huckson and his wife Elizabeth. Mary was baptised in the village of Ullingswick on 13 March 1864. Aged 21 she was living in Gloucester and was a general servant to the Wellington family. She married Albert Blacktop on 31 May 1866 at St. Giles Church Cambridge. 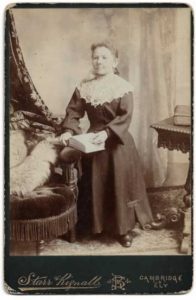 Albert was born in the village of Kingston – located 7 miles west of Cambridge, between the villages of Toft and Bourn.  He was baptised at All Saints and St Andrew’s Church in Kingston on 1 April 1866.  His parents were Samuel and Mary Blacktop;  in 1871 Samuel was the school master of Kingston and the family were living at the Schoolhouse in the village.  By 1881 the Blacktops had moved to live at 72a Castle Street in Cambridge, and Samuel was working as a bootmaker.  Albert was 15 years old at that time and was working as a domestic page boy.  He married Mary Huckson when he was 20 years old.

After being widowed he continued to live at Little St Mary’s Lane with daughter Hilda, and granddaughter Freda (1939). He died aged  87 years old in Hastings, Sussex.

Alice was the second daughter of Albert and Mary Blacktop.  She grew up at Worboys Yard and then Little St Marys Lane.  In 1911 she was living in Kingston upon Thames in Surrey, and working as a general domestic servant to Henry and Mary Maculay.  She married Edward Brown (1882-) at St Paul’s Church in Kingston on 22 June 1912.  Edward was a private in the East Surrey Regiment.  The couple settled in Watford, and had two sons: Norman Edward (1917-2001) and Gordon Alec (1928-1974).

Alice died in Watford aged 40 years old, by which time Edward Brown had already died. Her two sons were raised in Cambridge by Alice’s brother Samuel and his wife Fanny. Gordon Brown took on the surname of Blacktop.

Freda was the illegitimate daughter of Hilda Blacktop.  Aged 11, she was living at 4 Little St Mary’s Lane with her mother and grandfather.  She died aged 16 years old.

Hilda was the youngest daughter of Albert and Mary Blacktop.   She is noted on the census of  1939 as doing unpaid domestic duties. It is believed that she died at Addenbrookes Hospital aged 46 years old.

Many thanks to CH, great-great-niece of Mary Ann Blacktop for permission to use the family photo.