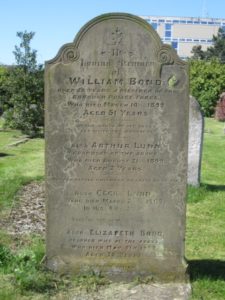 This grave is located in the parish of St Paul, to the west of the central path, between the centre circle and the junction with the south path, set one grave back from the central path. It comprises a headstone with decorative rounded top, on a pedestal. Each of the four inscriptions is accompanied by a quotation from a hymn or the Bible.

“Jesus lover of my soul,
Let me to thy bosom fly.”

“Suffer little children to come unto me”

“Safe in the arms of Jesus” 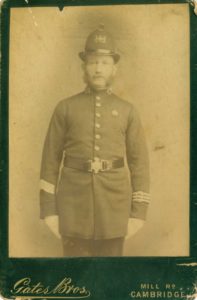 William joined the Cambridge Police on 5 September 1870 as a constable, he was promoted to sergeant on 12 September 1895.  As he was an early recruit to the service he had the service number 15 throughout his career. It was said he ‘served the town faithfully and performed duty during many of the old town and gown rows.  He was also amongst the officers on the Market Hill who go so roughly jostled whilst trying to protect the shop windows on the night of the Sirdar ‘rag’.’  He was ill for the last few months of his life and gave up work on 17 January due to an ‘internal complaint’.

He was admitted to Addenbrookes Hospital on 27 January and had an operation on 2 February.  At first he appeared to recover, but then relapsed and died six weeks after the operation.  The Cambridge News reported that he ‘was a man greatly respected in the town and took a great interest in the religious life of the place’.

The funeral service took place on Monday 13 March and started with a service at the Railway Mission Hall on Devonshire Road ‘where there was a crowded attendance’. William’s favourite hymn ‘Jesus lover of my soul’ was sung before the coffin was carried to Mill Road Cemetery by eight police colleagues.

Elizabeth was born in Toft and baptised there in 1850.  She grew up on Mill Road in Toft with her parents Robert and Elizabeth and her father worked as an agricultural labourer. After being widowed she continued to live at 57 Devonshire Road with her daughter Selina (known as Lena), and then with Lena’s family after she married Walter Goode in 1907. She died aged 78 years old.

Arthur was the grandson of William and Elizabeth, and the son of their daughter Elizabeth and her husband Thomas Lunn.  He died in an accident which the Cambridge Daily News reported under the headline of  ‘Shocking Burning Fatality’.  The case was subject to an inquest which the newspaper recorded ‘The victim is Arthur Lunn, the two and a half year old child of Thomas Lunn of the Royal Oak, Hyde Park Corner. It had been the custom every afternoon between two and three o’clock to put the child to bed for an hour or so.  On Sunday afternoon the little fellow was put to bed in the front room at the top of the house by Mr. Lunn.  The cot in which he slept was near the mantelpiece and unfortunately a box of matches lying on the shelf within easy reach of the child, entirely escaped Mr. Lunn’s notice.  The infant had not been left more than ten minutes when screams were heard by Mrs. Lunn and her daughter who were engaged in their domestic duties in the back yard. The mother apprehending there was something the matter with the child sent her daughter upstairs to see what was amiss and the latter was alarmed to find that the child who was fully dressed in his ordinary clothes was completely enveloped in flames.  She immediately called for assistance and this brought Mrs. Lunn on the scene. The mother, much frightened and at her wit’s end to know what to do with the child threw some water over him to extinguish the flames, and these having been subdued she brought the infant downstairs, and he was immediately taken by Mr. Hardy of the bathing sheds to Mr. Bull.  The wounds were dressed by the House Surgeon but they were of a very serious nature and little hopes were held out of the child’s recovering.  The arms and face were severely burned and the infant succumbed to shock, consequence on the injuries he had received this morning (21 August)’.

Cecil was the youngest son of Thomas and Elizabeth (née Bond) Lunn.  He was born at the Royal Oak pub, and In 1901 was living with his parents at the Black Bull in Longstanton where his father was the landlord.  He died shortly before his 4th birthday.

Thomas and Elizabeth’s only other child Florence died aged 31 years old and is also buried at Mill Road Cemetery.  After the Black Bull they took over the Waggon and Horses on East Road (1911). The couple retired to live in Great Yarmouth, and Elizabeth died there in February 1934. Thomas Lunn (1863-1939) returned to live in Cambridge and died at the Mill Road Infirmary aged 75 years old.