Emily was born in Suffolk, but was living in Sidney Street Cambridge when she married married Samuel Coulden.  They married on 16 September 1838 at Holy Trinity Church and had at least three daughters: Emily Susannah (1841-1897), Charlotte Maria (1884-1850) and Louisa Clarissa (1849-1927).  Samuel was a printer and engraver and the family lived at 21 Rose Crescent.  They retired to live at 26 Bateman Street where Samuel died in 1875.

Louisa Coulden married Denzil Charles Ibbetson (1847-1908) in 1870.  Denzil was a Cambridge graduate, administrator in the British Indian Civil Service and the couple lived in India for most of their married life.  In 1881 Emily was living at 26 Bateman Street with eldest daughter Emily, her two grandchildren (Louisa’s daughters Margaret and Ruth) and Denzil Ibbetson’s brother William who was a student at Cambridge University.  He daughter Emily  married William Ibbetson (1861-1889) in 1885 and they all went to live at 63 Bateman Street.  Emily died at their home  and was buried on 27 August.

Emily Coulden (jnr) did not marry until the age of 44, and her husband was 24 at the time.  He was a brilliant scholar, an authority on the Romany language and had been completely deaf since the age of 16. Twenty years previously (1864) Emily had sued Joseph Lyle for ‘breach of promise of marriage’ and had claimed damaged of £1,000. Joseph was a Cambridge University student who had lodged at the Coulden’s.  He had proposed twice to Emily and she had accepted the offer on the second time of asking in December 1860. Joseph returned to his parent’s home in Cornwall and his long and affectionate letters to Emily which ran until July 1862 were produced in court.  He was undecided as to his future career, and seems to have considered the Law, a military career and also of emigrating to a British Colony.  Joseph eventually decided to travel to New Zealand and sailed in July 1862. He wrote from the ship ‘I know my darling that you are grieved at my going away; but remember I depend on your love, and that you are my promised wife. Before 1863 has passed you will be with me and my own. God bless you dear Petsie. Don’t let people turn your love away from me’. Emily wrote to him repeatedly at the address he had given her but had no reply.  She later found out that he had met someone aboard the ship and married her as soon as they landed in New Zealand.  Emily was awarded £1,000 and the judge summed up by saying that ‘it should not be believed by any human being that it was through any fault or default of the young lady that the engagement was broken off’. 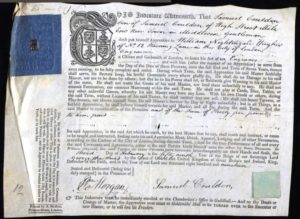 Samuel was born in London and baptised on 3 February 1805. He was the son of Samuel and Susannah Coulden.  He served a seven year apprenticeship to William Nightingale Hughes to become an engraver.  He engraved many of the cups, plates, salvers etc which were presented to dignitaries within the town.   He was a very keen horticulturalist and won many prizes for his various flowers. He also served as churchwarden for St. Michael’s Church (1855). He died at Bateman Street aged 70 years old and was buried 27 October.