George was the fourth son of William and Celia (née Harradine) Cox. He was born in Cambridge.His father ran a livery stable from Trinity Street, but died when George was 15 years old.  His mother took over the business and it moved to 49a Bridge Street (opposite St. Clement’s Church) – which is where George lived for most of his life.  In 1861 he was described as a scholar on the census return, and in 1881 was listed as a hosier.  In 1901 he was living with niece Harriet Ransom at her Lodging House on Jesus Lane – he was  documented as being 48 years old (incorrectly) and was said to be a gents outfitter and hairdresser.  By 1911 they were living at 22 Malcolm Street where Harriet was also running a Lodging House. George was working as an ‘athletic outfitter’ at that time and was said to be working on his ‘own account’ – i.e. neither working for an employer nor employing others.  He died in 1924 at Malcolm Street, and was buried at Mill Road Cemetery on 19 January

Matilda was born in Littlebury, Essex – a village two miles south of Saffron Walden and was George’s sister.   In 1861 Matilda was living with her mother and siblings at Bridge Street. 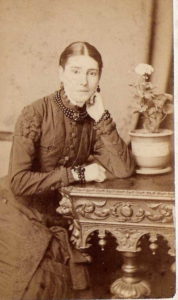 Harriet was the youngest daughter of Alfred and Susannah (née Cox) Ransom.  – Susannah was the elder sister of George and Matilda. Her father died when she was a year old, and her mother then went to the Isle of Wight to work as a governess. Aged 5 she was boarding with William and Rebecca Reynolds at 42 South Street together with her sister Henrietta.

The grave monument incorrectly records her age as 65 years, but she was actually 67 years old.