John was born in Soham, Cambridgeshire and ran a drapery business in Cambridge from at least 1819. Adverts from the time described him as a ‘linen draper, silk mercer, hosier and haberdasher’.  He also offered a funeral service ‘family mourning and funerals furnished – hearse and mourning coach with one horse each 25s to any part of Cambridge’ (October 1846). In 1846 he moved to larger premises at 53 Sidney Street which was opposite his previous store, and in October 1849 passed the business to his eldest son Henry.  Notices were placed in local newspapers to inform of the change of ownership and also promoting the sale prices on ‘best blankets, quilts, long cloths, fine  sheetings, table cloths, furs, silk, plaid and shawls, collars, hosiery and baby linen’.

The Leys subsequently was bought and established as the Leys School in 1875.

Henry was baptised at All Saint’s Church on 31 March 1820 and worked as an assistant in the family business (1841) before taking over the drapery business in 1849. In 1851 he was living at 53 Sidney Street with five assistants, a cook and a housemaid.  An advert for an apprenticed placed in January 1851 described him as a ‘draper, hosier, silk mercer and furrier’. He married Mary Alice Toller (1825-) on 3 July 1851 in Great Wilbraham and the couple had at least one daughter: Edith Constance (1855-1925).

Henry did not run the business for long and by at least 1855 was living in London and became a ‘colonial explorer’. He sailed on the Marco Polo  in 1861 and was involved in a near accident when the ship ran into an iceberg north of Cape Horn. He then moved to America, where he ran a cotton plantation in Vicksburg, Mississippi.  He started this at what was said to have been the height of the American Civil War (which ran April 1861 – May 1865).  He was said to have been offered ‘adequate protection from the United States Government’ but that never happened and it was said Henry had to cope with ‘plundering bands of guerrillas on the one hand and troublesome and refractory negroes on the other. Nevertheless he succeeded in raising a crop, and only retired when he found that in the then existing state of things it was utterly impossible to grow that crop without great pecuniary loss, as well as personal risk’.  Henry returned from America and was given a certificate by the American Government in November 1864 which stated ‘This is to certify that Henry John Dennis…is the first Englishman that has grown cotton  by free colored labor in this District of the Slave Sates of the Mississippi, United States. The said cotton grown on the ‘Adams’ plantation, sixteen miles south of Vicksburg in the year of adversity, army worms (an insect which destroyed cotton plants) and guerrillas’. 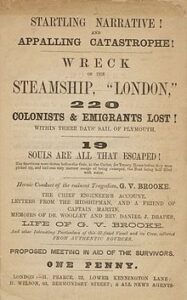 Henry returned to  live at 11 The Grove, Clapham but set off for Australia  on 13 December 1865 aboard the SS London.  The ship sailed from Gravesend to Plymouth to pick up more passengers but was caught in bad weather and had to dock near Portsmouth. It eventually left Plymouth on 6 January 1866 bound for Melbourne.  It ran into more bad weather crossing the Bay of Biscay and sank on 11 January killing Henry and 219 other passengers and crew.  Only 19 people survived from the shipwreck.   A message from Henry reportedly read ‘”Adieu, father, brothers and sisters, and my dear Edith. Steamer London, Bay of Biscay. Ship too heavily laden for its size, and too crank. Windows stove in. Water coming in everywhere. God bless my poor orphans. Storm not too violent for a ship in good condition.”

Mary was the eldest daughter of John and Elizabeth and was baptised at All Saints’ Church on 4 August 1822.  She died aged 23 after what newspapers described as ‘after a few weeks illness, which she bore with the most Christian fortitude and pious resignation’.  She was buried at All Saints’ churchyard on 18 August.

Edward was the second son of John and Elizabeth Dennis and was baptised at All Saints’ Church on 13 June 1824. He became a missionary and died in Whydah (modern Benin), West Africa.

by Claire Martinsen and Mary Naylor