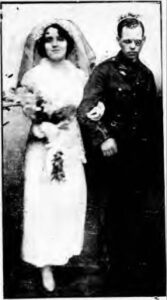 Gladys was the youngest daughter of  Rebecca and William Digby and married Lieutenant James Edgar Leach (1892-1958) at St. Botolph’s Church on 23 December 1915.  James was home on leave from the front, and was Commandant of the 1st Army School of Signalling when they married.  As a second Lieutenant he had been awarded a Victoria Cross in October 1914  when along with another soldier named Hogan and ten volunteers he had ‘recaptured a trench they previously held, surprising the Germans with a sudden bayonet charge….they re-took the entire trench, killing eight of the enemy and taking 16 prisoners’.

Gladys died a few months after the marriage, and James married for a second time in 1917 to Josephine Pansy Butt (1895-1961)

Albert was the youngest son of Rebecca and William Digby and died at the Cottages at Queen’s College just after his first birthday.

William worked as a college servant at Queen’s College and the family lived at one of the Cottages at the College.  Rebecca died aged 60 years old.

William was born in Great Leighs, Essex and baptised at St. Mary the Virgin Church in Great Leighs on 15 July 1860.  He was the son of agricultural labourer James Digby and his wife Charlotte (née Poulter).   By 1939 William had retired and was living with his daughter Ethel and her husband Percy Gunns in Hardwick.  He died at Addenbrookes Hospital aged 85 years old.