Inscription : In Ever Loving Memory of HB FANTHAM MA Cantab DSc Lond FRSSAF Professor of Zoology University of the Witwatersrand Johannesburg 1917-1932 Strathcona Professor of Zoology McGill University Montreal 1933-1937 elder son of the late B and A FANTHAM and most dearly beloved husband of ANNIE PORTER DSc passed from active service on earth into the peace of God that passeth understanding 26 October 1937 ANNIE PORTER FANTHAM DSc intensely loved wife of HB FANTHAM re-united 8th May 1963 slab also of ANNIE FANTHAM dearly beloved wife of B FANTHAM and mother of the above d 11 January 1911 aged 62

This headstone is located in the northern section of the parish area of St Andrew the Great.  Walking west from the centre circle count 12 rows  along the east west path and then 6 monuments north. The carved inscription is still clear at the top but faded at the bottom. The slab easily becomes covered by grass.

In Ever Loving Memory of HB FANTHAM MA Cantab DSc Lond FRSSAF
Professor of Zoology, University of the Witwatersrand Johannesburg 1917-1932.
Strathcona Professor of Zoology McGill University, Montreal 1933-1937.
Elder son of the late B. and A. FANTHAM and most dearly beloved husband of ANNIE PORTER D.Sc.
Passed from active service on earth into the peace of God that passeth understanding 26 October 1937

slab
Also of ANNIE FANTHAM dearly beloved wife of B FANTHAM and mother of the above died 11 January 1911 aged 62 years
“At Rest.” 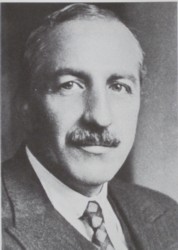 Harold was born in Birmingham and was the son of Benjamin and Annie Fantham.   His father was a cabinet maker, and he grew up at 37 Hanover Street in Birmingham.  He was educated at Christ’s College Cambridge, where he got his MA, and then University College London, where he was awarded a DSc.  He was a Gold Medallist and Derby Research Scholar at University College, and a Darwin prizeman at Christ’s College.  Harold was a very eminent scientist of his time.

He taught biology at St Mary’s Hospital Medical School (University of London) from 1904-1907.  He then moved to the Zoological department within the University from 1906-1908 where he conducted research into protozoa.  From 1908-1910 he worked at Cambridge University where he was the assistant to the Quick Professor of Biology.  In this role he acted as protozoologist to the Grouse Disease Enquiry.  From 1910-1915 he lectured in Parasitology at the School of Tropical Medicine, University of Liverpool.  He served in the First World War as a parasitologist and then protozoologist to the British Forces in Salonica until he was invalided in 1917.

He met his wife Annie Porter whilst worked at the Quick Laboratory, and they married on 24th November 1915 at St Catherine’s Church in Liverpool.  Annie was also a formidable scientist and was a Doctor of Science, and research fellow at the time of her marriage.

From March 1917 to 1932 Harold Fantham was Professor of Zoology and Comparative Anatomy at the University of the Witwatersrand, where he founded the School of Zoology.  His main research interests at Witwatersrand were the protozoa found in South African soils and the heritage and eugenics of populations groups in South Africa. He published hundreds of papers during his career, many co-authored with his wife Annie.  He was described as having a ‘forceful personality’ and being an ‘inspired teacher’.

In 1932 the couple moved to Canada, where Harold worked as a Professor of Zoology at McGill University.  He died in Montreal in October 1937, and was buried at Outremont Cemetery in the city, and also remembered in Cambridge.

Annie was the daughter of Samuel and Mary Elizabeth Porter.  She was born in Brighton, and grew up at 8 Lewis Road (1881) and then 10 Preston Road (1891/1901) where her father worked as a poultry and game dealer. Aged 21 she was living at home and working as a pupil teacher (1901).  She then went on to study at University College London, and later moved to work at the Quick Biology Laboratory in Cambridge.  From 1914 – 1917 she was the Beit Memorial Research Fellow at Cambridge University. She married Harold Fantham in 1915 when she was 35 years old.  She kept her maiden name of Porter for her academic work.

From 1917 she was Head of the Department of Parasitology at the South African Institute for Medical Research in Johannesburg. She was also Senior Lecturer in Parasitology at the University of Witwatersrand.  From 1933 – 1938 she was a research associate in Zoology at McGill University. She returned to live in England in September 1938.  She lived lived at 2 Wellington House, Greenberry Street in St Johns Wood and died at St Pancras Hospital aged 83 years old.  Annie was buried in Cambridge with her husband.

by Sheila Plaister and Claire Martinsen