This coped stone, in the parish area of St Andrew the Great, is located on the first row to the left of the path, north of the centre circle, under the large cedar tree.  CFHS were unable to read a name on the inscription but after their transcription of the grave register in 2017 we were able to identify this monument.

This was all CFHS could read :

The following details are taken from the burial records 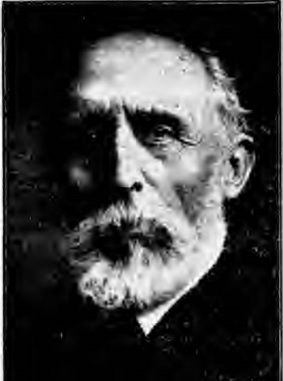 William was the son of Rev. James and Isabella Fawcett and was born in Woodhouse, Leeds where his father was the vicar of St. Mark’s Church.  He was baptised at St. Mark’s on 21 August 1832. He went to Leeds Grammar School and then to Jesus College Cambridge.  He got his B.A in 1855, and his M.A. in 1862.  He graduated among the ‘senior optimes in the Mathematical Tripos’ of his year.

He began to practise as an architect in 1859, serving as county surveyor for Cambridgeshire (1861) and Diocesan surveyor for Ely (1871 onwards).  He planned many public buildings in Cambridge including:  additions to Addenbrooke’s Hospital, the Cambridge Police Station, the Training College for Women as well as remodelling the County Jail. He was also said to have built or restored over 50 churches in his role for the Diocese of Ely.  He worked on numerous additions and buildings for the University and Colleges including: The Cavendish Laboratory, Queens College, Emmanuel, Peterhouse, lecture rooms in the Chetwynd Court of King’s College, college boathouses, cricket pavilions.   He also designed private houses both in Cambridgeshire and further afield. He was admitted as a Fellow of the Royal Institute of British Architects in 1870, and served on the council from 1871-1873 and from 1884-1899.  He was Vice-President of RIBA from 1896-1900.

He married Emily Heycock on 6 June 1872 in Rutland and his father James helped officiate at the marriage ceremony. Emily is thought to have been a relative of his aunt Elizabeth (née Heycock) Fawcett. They lived at 1 Silver Street (1881) before moving to live at 3 Scroope Terrace (1890 onwards) which he had inherited from his uncle Rowland Morris Fawcett. They are not thought to have had any children.

His great passion was the Volunteer Army. He served with the Volunteer Corps whilst at Jesus, and then joined the Cambridge Town Corps in March 1860.  He commanded the movement for many years, and eventually retired as Honoury Lieutenant -Colonel in January 1896.  The Cambridge Independent Press reported his ‘labours for the Corps were untiring and the services he rendered to the cause can hardly be overstated.  During his command money was raised by subscriptions, bazaars and various other means to pay off the outstanding debt and to acquire the badly-needed rifle range on Coldhams Common’.

He was secretary of the Mill Road Cemetery Company, director of the Cambridge University and Town Gas Light Company. He also served as President of the Cambridge Anquitarian Society from 1894-1895.  He was said to have ‘possessed an extremely kind and charitable disposition, which found an outlet in various kinds of philanthropic work….the full extent of his philanthropy will probably never be known publicly’.

He died at Scroope Terrace aged 76 years.  The Cambridge Independent Press reported ‘although for a fortnight he had been ailing and compelled to keep to his bed there appeared no cause for anxiety. After breakfast on Sunday he directed the nurse in attendance to go to her meal. A few minutes later it was found that he had passed away, death being due to heart failure’.

Emily was the eldest daughter of Frederick and Mary Heycock  and was born in Headingley, Leeds.  She was baptised at St. Michael’s Church Headingley on 6 September 1843.  Her father was a ‘gentleman’ and she lived in Llangarron, Herefordshire (1851) before her parents moved to live at  Braunston Manor, Rutland (by at least1861). She married William Fawcett in Braunston when she was 29 years. 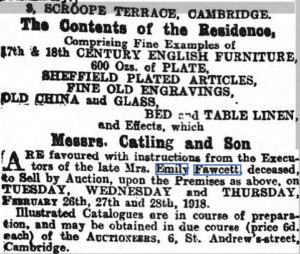 After she was widowed she continued to live at Scroope Terrace and in 1911 was living there with her sister, a ladies companion and two servants.  She died at home aged 74 years old. Her funeral was held at St. Botolph’s Church on 22 October 1917.  The contents of Scroope Terrace were sold over three days at what was called an ‘important furniture sale’.  The sale was well attended and record prices were achieved for some of the pieces.  The price of every lot was reported by the Cambridge Daily News including: a set of four 10 inch Sheffield plate table candlesticks (£9), silver spoon warmer with beaded edges (£2 2s) and a Worcester ‘tea and coffee service decorated with floral sprays and buff and gilt borders, comprising 2 bread and butter plates, cake plate, milk jug, slop basin, 14 coffee cups, 17 tea cups, 25 saucers’ (£19 10s).

By Mary Naylor and Claire Martinsen