Stone cross, with embossed circlet of oak leaves, on triple pedestal. Inscriptions on west and south faces, with lead inlay. In the parish area of St Mary the Less, this grave is located northeast of the centre circle. 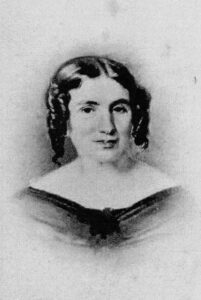 Mary was born in Whitbeck, Cumbria and baptised there on 5 May 1797.  She was the daughter of Rev. John and Agnes (née Brade) Brocklebank.  Her father was the Rector of Whitbeck, and after he died in 1825 she moved to live in West Derby, Liverpool.  She married Joshua King (1798-1857) at St. Mary’s Church, Edge Hill on 20 June 1833 and her brother  Rev. Robert Brade Brocklebank (Perpetual Curate of St Chad, Malpas, Cheshire), performed the ceremony.  Joshua had also been born in Cumbria  and was a Cambridge academic.  He was President of Queen’s College when they married (see life story page) and the couple lived at Queen’s College.  They had at least three children: Margaret Elizabeth, Joshua (1836-1927) and Rev. John (1838-1878).

Mary was widowed in September 1857 when Joshua died at the President’s Lodge aged 59, and she then moved to live at Uphall in Hillington, Norfolk (1861) with children Margaret and Rev. John King.  By at least 1871 she had returned to Cambridge and lived at 1 St. Peter’s Terrace.  She died at home aged 87 years old and her death certificate recorded  the cause of death as ‘climacteric disease’.  She left an estate valued at £110,243, 15s and 1d (c£4.5m at 2019 values).

Gerard (see life story page) was a Cambridge graduate, who worked as a barrister when he married Margaret. They lived at 10 Lyndhurst Road Hampstead, London but had returned to Cambridge by 1885 when Gerard was appointed Professor of Law at the University.  They lived at 1 St. Peter’s Terrace and Margaret died there aged 62 years old.

Gerard married for a second time on 7 November 1898 to Amelia Janet Kelly (known as Milly) (1860-1934). Milly was a nurse who had been working at Addenbrookes Hospital in 1891.  They went to live at Howes Close, Huntingdon Road and Gerard died there in March 1913. He is buried at Girton Cemetery.

Many thanks to Dr. G. Clarke descendant of Margaret Finch for permission to publish the family photos on this website.