This set of double kerbs with flower holder and ground slab is roughly 8 rows west of the central path under a large tree. The inscriptions are of metal letters some of which are now missing but still mostly legible.

urn
A token of remembrance from Fowlmere

Alfred was the son of Frederick Searle Fuller and his wife Ann (née Collins). Frederick ran the Midland Tavern, on Devonshire Road and died in 1882.  Alfred then grew up at 74 Kingston Street (1891/1901) and by the age of 20 was an assistant schoolmaster.  From at least 1920 onwards Alfred was the headmaster of Fowlmere School and the couple lived at the school house in Fowlmere. He died aged 55 years old at Addenbrookes Hospital.

Annie was the eldest daughter of William and Annie Wortley  and married Alfred Fuller in 1909. Alfred was an assistant school master and in 1911 the couple were living at 95 York Road in Bury St. Edmunds.   After she was widowed she went to live a 49 Mawson Road and died at 29 Union Lane in Cambridge.

Annie was born in Wood Ditton and was the daughter of William and Martha. Her father worked as a farm bailiff and her mother as a needlewoman.  Annie died aged 80 years old.

Dora was the daughter of William and Annie Wortley and grew up on Newmarket Road where her father ran the Abbey Dairy.  Aged 21 she was living at home and working as a clerk in a sewing machine shop before marrying Albert Ernest (Bert) Horspool (1889-1917) on 26 December 1916 at Christ Church. 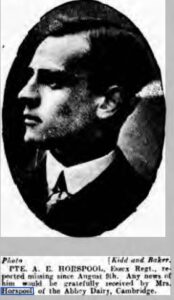 Bert was a baker who worked in his family firm and in November 1916 his father applied for exemption from the army on the basis that his other son was already at the front and he could not continue the business without Bert’s help.  A temporary exemption until the year end was granted and Bert eventually joined the Hertfordshire Regiment as a Private. He was later transferred to the Essex Regiment and was reported missing on 9 August 1917.  The Cambridge Independent Press printed a photo of Bert and a request for news in December 1917 and it was not until June 1918 that his death was confirmed. Bert Horspool is commemorated on the Arras Memorial at Faubourg-D’Amiens Cemetery, Arras.  In August 1918 Dora placed an message of remembrance in the Cambridge Independent Press which read ‘in ever-loving memory of my dear husband, Pte. A.E. Horspool, killed in action at Monchy near Arras. August 9th 1917. ‘Not for himself, but for others’ – From Abbey Dairy, Cambridge.’

Dora returned to live with her parents at 7 Parker Street and then at 7 Clarendon Street (at least 1950-1966). She died at Chesterton Hospital aged 90 years old.