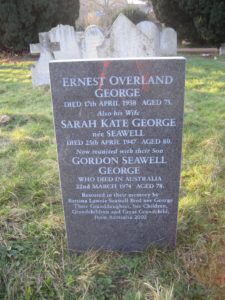 The family restored the monument in 2002 adding a headstone.

The new inscription can be read by clicking on the photo.

Edwin was the son of John and Rebecca George and was born in Hilborough, Norfolk.  He was baptised in Swaffham on 1 July 1863 and grew up at Mangate Street in Swaffham where his father was a linen draper.  By 1881 he was living at 74 Burleigh Street with his maternal aunt Sarah Barber and her husband Charles. Charles was a college cook at Sidney Sussex  College, and Ernest was working alongside him also as a college cook.  By 1891 Charles was running the Prince of Wales Hotel on Sidney Street, and Ernest worked in the hotel as cook.

He married Sarah Seawell on 11 January 1893 at Christ’s Church, Cambridge and the couple had one son: Gordon Seawell (1896-1974).  They lived at 5 Downing Terrace (1901) and Ernest was manciple (in charge of kitchen purchasing) for Corpus Christi College.  By at least 1908 the family were living at 1 Warkworth Terrace and on the census of 1911 he was described as a college cook. In 1920 Ernest and Sarah were living at 15 Mackezie Road and he died there aged 75 years old.

Sarah was the daughter of Edwin and Caroline (née King) Seawell and grew up at 17 & 18 East Road where her father ran a grocery store. She married when she was 26 years old and after being widowed remained at Mackenzie Road until at least 1939.  By 1945 she had moved to live at the Royal Albert Homes at 175 Hills Road.  She died at home aged 80 years old.