This  broken cross (thought to have been a Celtic cross above the inscription) is located on the western edge of the southern section of the centre circle which belongs to the parish of Mary the Less. The carved inscription is badly eroded and only a few words can now be identified.

Harold was the youngest of the four sons born to the Rev John Henry and (Sarah) Amelia Grubb [nee Page].  His father was a Wesleyan Minister, and he grew up at 80 East India Road in Poplar [1881] and then at Wilberforce Road in Highbury, London [1891]

He went to the Leys School in September 1893, joining in the IVth form.  He appears to have been a keen draughts player, and took part in a Leys draught tournament in December of his first term.  In the summer of 1894 he won the Grammar Prize for IVth form at the Annual Speech Day.

Harold died of pneumonia aged 14 years old.  The winter of 1894/95 was severely cold, with an average temperature of 1.27 degrees celsius/34.3 degrees fahrenheit.  The cold temperatures affected most of  Europe and North America very severely, with mass unemployment and disruptions to trade as the River Thames froze [the last known time on record]. Many people died of hypothermia, pneumonia and related illnesses.  At the Leys school the pitches were iced over, and the pupils were able to enjoy skating on the nearby rivers instead. The school reported numerous cases of flu in March 1895, and had to convert a dormitory into an overflow sick room dormitory.  The cases of illness proved so much that the term was terminated early ‘on Tuesday 26 [March], the doctor announced that, owing to the sickness which had been so prevalent during the last four weeks of the term, the authorities had determined to lengthen the vacation which would begin on April 3, instead of as formerly arranged on April 10′ [The Leys Fortnightly, May 8 1895].

Harold appears to have been ill with pneumonia for a number of weeks at the school, and died after ‘a long-drawn struggle’.  The following was published in the Leys Fornightly, Vol 19, No 355 on 8th May 1895. 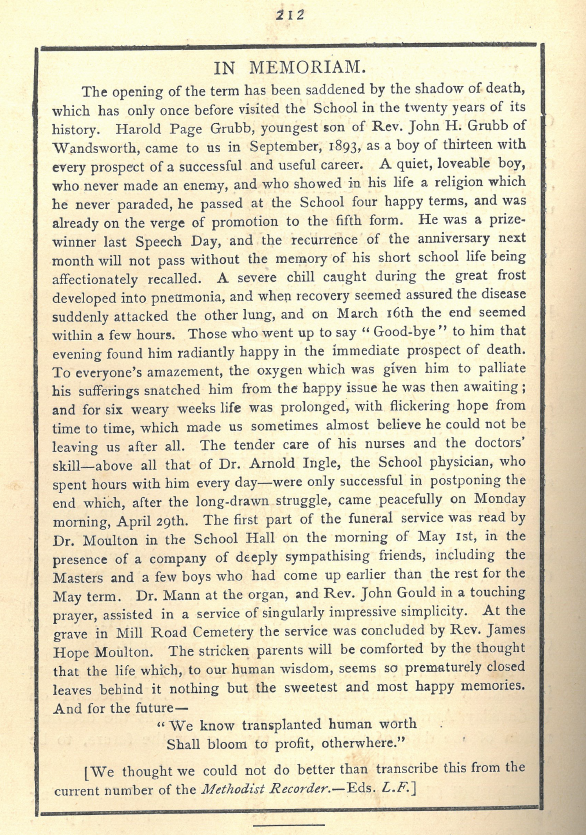 With our thanks and gratitude to the archivist and librarian of the Leys School, Cambridge for their detailed research and information

[ If you have any further information about this person, please contact us at Friendsofmillroadcemetery@gmail.com]