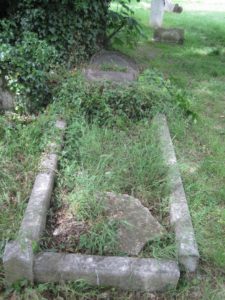 A few rows west of the centre path under a large tree. The right corner post is missing. Otherwise it seems to be very much as found by CFHS 20 years ago.

Arthur worked as a house painter through his life and the family lived at 58 Burleigh Street (1891) and then 9 East Road (at least 1901 onwards).

Elizabeth was born in Huntingdon and is believed to have been the daughter of Wiliam and Harriet.  She was baptised on 11 November 1866. In 1881 she was living at 8 Park Terrace and working as a housemaid to John and Emily Ellison, before marrying in 1888.  After she was widowed she continued to live at 9 East Road with eldest son Maurice and his wife Eleanor. She died at home aged 91 years old.