This set of kerbs with broken cross within, is located roughly 7 rows east of the central path in the parish of Holy Trinity. It borders the southern path to the north so easy to find but subject to bramble and ivy growth. The inscriptions of metal letters appear intact.

on the cross
Peace Perfect Peace 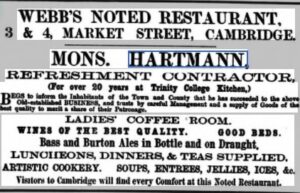 The family lived at Histon Road, but moved to Market Street when Alfred took over Webb’s Restaurant in February 1893.  He also did outside event catering including the Royston Show (1902), the Cambridge Rowing Association Annual Dinner (1902) and the Anniversary dinner of the Ancient order of Foresters (1907)

A photo from the concert shows Alfred standing first left on the 3rd row back. On 31  December 1914 he played the part of  Santa Claus at a party held at the Conservative Club for Belgian children.  The Cambridge Independent Press reported ‘a huge Christmas tree was the cynosure of all eyes throughout the evening. It was weighted with beautiful gifts from the American Santa Claus shop, from the children of St. John’s Parish and of All Saints’ Parish. Mons. Hartmann…distributed the gifts to the happy children. Dancing was indulged in and refreshments were handed round by many helpers. At the close of the party the French, Belgian and British National Athems were sung’.