Why Cambridge needed another burial ground, and when and how the Mill Road site was chosen.

By the early years of the 19th century, overcrowded parish churchyards had become a serious problem in Cambridge, and a new burial ground outside the town was needed. 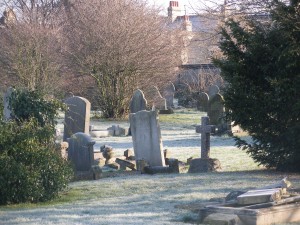 Increasing numbers of people came to work and live in Cambridge during the Industrial Revolution. From 1821 to 1831, the population of the parish of St Andrew the Less tripled to 6,909 and other parishes including All Saints, St Andrew the Great and Holy Trinity also saw substantial rises. By the end of the 1830s, nine of the existing churchyards were completely full, and there was little room to extend their grounds as new urban developments had been built around the churches.

In 1831, the first cholera epidemic reached England, and people worried not just about the unpleasantness of re-interring in the crowded churchyards, but also about the spread of disease. The Cambridge Chronicle urged the establishment of a new cemetery ‘without the walls of the town’ to ease the problem of overcrowding and lessen the dangers to public health, warning that graves could not currently be dug more than 2 or 3 feet deep, whereas: ‘persons dying of Cholera [should] be buried in graves from 6 to 8 feet deep’ as the disease was thought to be spread ‘by effluvia from the dead bodies’.
Cambridge Chronicle, 17th February 1832

Despite the newspaper’s appeal, little changed until 1843 when Histon Road Cemetery was built for Non-Conformists by a private, non-profit-making company. The following year, a meeting was held at the home of the Revd G Maddison. That considered the outcome of a rather similar meeting in Oxford in 1843 which had set in hand the provision of three new burial grounds there, the Holywell, Osney and St Sepulchre’s Jericho burial grounds; all subdivided into parish plots. A paper was prepared after the Maddison meeting urging action to provide additional burial grounds in Cambridge, using the 1819 Church Building Act as preferable to setting up a company. The Archdeacon of Ely convened a meeting of clergy and churchwardens in the Town Hall on 17 October 1844, and a public meeting was held on 6 November 1844. That meeting resolved to set up a General Committee for the Extension of the Parish Burial Grounds. It consisted of all the clergy and churchwardens of the relevant parishes, five Masters of Colleges and 24 named persons, both clergy and laity, with power to add to their number. Not surprisingly, it in turn set up a sub-committee which met frequently to do the detailed work.

With great enthusiasm and energy, the CPBGC set about raising funds and looking for suitable sites. The estimated expense of the project was £5,000, and the parishes and University colleges quickly raised contributions of £3,640, enabling plans to proceed.

During 1845, the Committee were keenly negotiating to buy a 6-acre parcel of land on the new Botanic Gardens site in Trumpington Road, but a price could not be agreed. In December, it was suggested they look at some land near Mill Road ‘adjoining the site of Old Barnwell Chapel’, owned by the Rev Dr Richard John Geldart of Little Billing, Northampton. Eventually an area of almost 10 acres, set back from Mill Road and surrounded by land owned by Caius and Corpus Christi College Estates, was bought for £2,146. Drainage was a problem for burials on the east of the site, so an extra rectangle of land at the north was added.

In August 1847 the land was conveyed to the Church Building Commissioners for the use of the 13 parishes of All Saints, St Andrew the Great, St Andrew the Less, St Benedict, St Botolph, St Clement, St Edward, St Mary the Great, St Mary the Less, St Michael, St Paul, Holy Sepulchre and Holy Trinity, as an extension to their burial grounds. Each of the 13 parishes was allocated an area of the cemetery based on their anticipated burial needs. Meanwhile, it was suggested that a separate burial ground be established in the north of Cambridge to provide extra burial space for the parishes of St Peter and St Giles.

History of the Cemetery