Both monuments are located on the west wall in the parish area of St Paul in an area that is often covered in bramble.

1 Has the cross intact and monument 2 has lost it’s cross but from the pieces on the ground it looks as if they were a matching pair. The inscriptions on M1 is beautifully carved on the east plinth but now partially buried. Some of the metal letters on M2 are damaged. 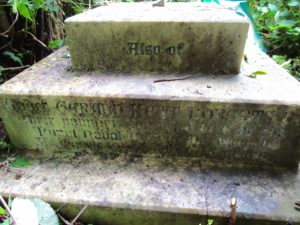 Born in Wymondham Norfolk to George and Sarah Kett (PL572). The family moved to Cambridge c1848 where his father worked as a “carver at the Cambridge Carving Works”. Later to become Rattee & Kett. George junior was also working there by the 1851 census. At this time the family were living at 3 Petersfield. They later moved to a house built by George in Brooklands Avenue. They named it Wymonham House.

Maud was the youngest child of George and Catherine Kett.

Third child of George and Catherine Kett of . Wymondham House Brooklands Avenue. Her father George was a builder and contractor and her grandfather George Kett was part of the Cambridge architectural masonry company Rattee & Kett.  (see also Elizabeth Evans Mary and George Robert Kett and Frederick James, George, Sarah and Susannah Elizabeth Kett family graves, which are listed monuments).
Catherine married Reginald Roberts at St Pauls Church Hills Road Cambridge on August 1st 1889.  There was a detailed account of the wedding in the Cambridge Independent Press in which we learn that they spent their honeymoon in Scotland. Reginald was a 27 year old physician from Lowestoft. His father Reginald Jolliffe Roberts was master of Holt grammar school. There were eleven witnesses recorded at the wedding. In 1891 they were living  in Regent Road, Lowestoft. They had two sons Reginald (b 1892) and Gerald (b 1894). It appears that Catherine died at or shortly after the birth of Gerald. She was 30 years old. Her husband married again in 1896 in Jersey, possibly to Catherine’s sister Alice.

If you have any further information, please contact us at Friendsofmillroadcemetery@gmail.com]