This grave was not located by the CFHS Survey.

This tall celtic cross in the parish of St Paul, is located against the west wall.  St Paul row 1, grave 16

Elizabeth was born at Burleigh House, 240 Newmarket Road, Cambridge to Charlotte and Frederick Bailey. Frederick was a brewer and on the 1871 census he was described as a brewer (employing 29 men) and farmer (employing 3 men and 4 boys). She married Frederick Miller on June 28th 1892 in the parish of St Andrew the Less.  Frederick was a wine and spirit merchant and the couple lived at Chesterton Road and then at 8 Downing Grove, 44 Lensfield Road (at least 1901 onwards). They had one daughter Doris, who died as an infant.

Elizabeth died at home aged 46 years old and left an estate valued at £5,298 13s 1d to Frederick. The will was contested by her siblings, who claimed that she had been persuaded to change her will by ‘undue influence’. The case went to court in March 1916, where John Fish Symonds appeared to swear that he had drawn up the revised will and had witnessed Elizabeth signing it in May 1911.  He said that she had been alone when instructing him, and also when she signed the will in the presence of both himself and his clerk.  He swore she was of sound mind and knew what she was doing.  The case was withdrawn by Elizabeth’s family. 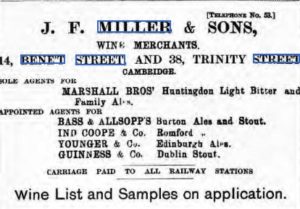 Frederick was the eldest son of James and Laura Miller whose grave is to the right of this monument. His father ran a wine/spirit and beer business at 14 Benet Street and he took over the family company. He later opened a second branch at 38 Trinity Street.  In 1939 he was still living at 44 Lensfield Road with two servants:  cook Malinda Brown and housemaid Eva French.  He died at his home aged 79 years, and left an estate valued at £23,739 3s, 7d.

Doris was the only child of Frederick and Elizabeth Miller. She was born at “Oakhurst” Chesterton Road, Cambridge and baptised on September 22nd 1897.