Monument : Stone cross (base only)

Located 7 rows east of the central path. The cross fell many years ago and we cannot be certain that the urn was not placed there at a later date by person’s unknown. The inscription is no longer legible but the parish grave register has been used   – Grave register row 7 plot 10. 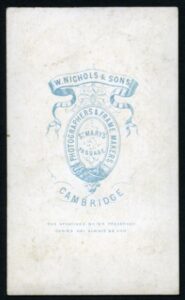 Herbert  spent some time in America as adverts in local newspapers from 1864  announced that he had ‘practice and experience in some of the first photographic establishments in New York and Philadelphia assisted by the most perfect instruments that can be procured from abroad, and the best of home manufacture, will enable them to produce every description and size of photograph in the best style’.  He headed up the photography department of Nichols and Sons whilst younger brother Edward headed up the frame making department.

In 1867 he was involved with the New Year’s Eve treat for the children at union and showed a ‘series of dissolving views’.  The Cambridge Chronicle and Journal noted that he ‘is always ready to give his services in aid of everything good or charitable’. He was also a keen horticulturalist and in June 1872  exhibited his collection of ‘125 rare and choice ferns’ at the Cambridge Florists’ Society Show. Herbert died aged 37 years old and was buried at Mill Road Cemetery on 26 January 1874.

William later worked as a bookbinder (1851) and then as a photographer (1854 onwards). In June 1864 the Cambridge Independent Press reported that he had donated two portraits to the Free Library (of the Mayor and donor Mr Henry Thomas Hall).  They also noted that he had taken ‘four very excellent views of the decorations in Fitzroy Street. The views have been much admired for their accuracy and correct delineation of familiar faces, as well as the designs’.

In 1871 he was living at St. Mary’s Passage with his sons, Annie Nichols and two grandchildren and died there aged 60 years old.

Ann was the second daughter of John and Elizabeth (née Furgerson)  Vail and grew up on Downing Street where her father was a whitesmith and bell hanger.  After Thomas’ death she continued to live at 2 St. Mary’s Passage with brother in law Edward, and died there on her 44th birthday.

Helen was baptised on 11 September 1864 at St. Andrew the Great Church. She died at St. Mary’s Passage aged 3 years and 6 months old.

Clara was baptised on 7 November 1872 at St. Mary the Great church and died at St. Mary’s Passage before her first birthday.

Herbert and Annie’s other daughter Edith was also buried in the Great St. Mary area of  Mill Road Cemetery and is also believed to be buried in the same grave.

After the death of her parents Edith went to live at 10 Parker Street with her maternal aunt Mary Ann Vail. In 1891 she was working as a draper’s assistant and later worked in a drapers in Islington (1901). She died at 10 Parker Street aged 34 years old and her funeral took place on 28 April.