Edward was born in Kentford near Newmarket and was the son of John and Eliza Nunn.  He grew up on Bury Road in Kentford and his father worked as a stud groom.  Aged  22 he was lodging in Woodstone, just south of Peterborough and working as a railway guard.  He married Ellen Oliver (1885-1957) in Wisbech in 1906.  The couple had one son: Derrick Edward and in 1911 were living at 70 Hemingford Road in Cambridge, where Edward worked as a railway guard for Great Eastern Railway. The family later moved to 111 Mawson Road, and Edward died at Addenbrookes Hospital aged 58 years old. 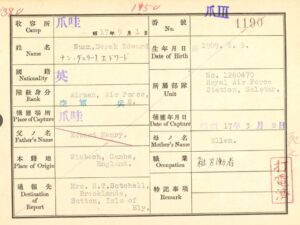 Derrick was the only child of Edward and Ellen Nunn and was born in Wisbech.  In 1939 he was living with his mother at Mawson Road and working as a museum assistant.  He served in the RAF during the 2nd World War and was held in a prisoner of war camp in Java, Indonesia by the Japanese.  Records show that he died of beriberi and was buried at sea.