This cross feb many years ago but the inscription is still clear. Located 7 rows east of the central path to the south of the parish.

“Into Thy hands I commend my soul.”

Mary was born in Ipswich and baptised at St. Mary Stoke on 18 January 1818. She was the daughter of miller William and Mary (née Baker).  After she was widowed she lived at 161 Chesterton Road with youngest son Arthur, who was a Cambridge graduate and worked as a private tutor.  She died at home aged 89 years. 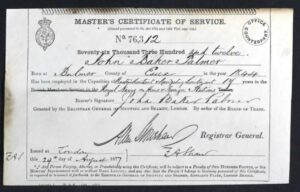 John was born in Bulmer and baptised at St. Mary’s, Great Henny on 26 January 1845. He joined the Royal Navy on 8 September 1860  and when the census of 1861 was taken was aboard HMS Melpomene, off the coast of Iskenderun, Turkey.  He rose through the ranks from Master’s Assistant (1861) to Navigating Lieutenant (1871) and then Staff Commander.  He was awarded the Egyptian Medal in 1883 and at that time was serving on H.M.S Penelope.  When he died he was Staff Commander of the newly built H.M.S Rodney.  John died at 27 Hills Road and his funeral took place on 19 April 1887.