Located close to the south wall, in the parish area of St Paul, this tomb has sustained some damage to the lid which has collapsed inwards. Most of the inscription has been checked but it is badly eroded so parish and census records were used to correct the original transcription.

It is thought that Hervey was the tenth child of Edward and Sarah (née Mead) Preston and baptised at St Andrew the Less in 1804.  He married Ann Parry at St Cuthbert’s Church, Thetford on July 8th 1829.   The couple had at least four children, three of whom died as very young children.

Hervey worked as a merchant trading corn and coal and the family lived at 54 Hills Road.  He died in 1861 aged 57 years. After his death some of the household furniture was auctioned off including ‘cottage pianoforte by Metzler, set of sliding frame dining tables, chettioneer and effects’.

Ann was the daughter of Thomas and Mary Preston Parry. She was born in Thetford and baptised there on December 28th 1806. After she was widowed she lived at 54 Hills Road (1861,71,81) and her occupation was given as owner of houses, or ‘lets appartments’. 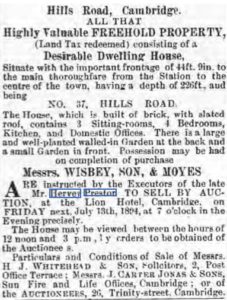 Her sister Sarah Preston Headdey is buried in the next grave to the north.

Clara was the second child of Hervey and Ann Preston. She was baptised in 1832 and grew up at Hills Road.  She died aged 28, and the notice of her death in local papers stated ‘deeply lamented Clara Mary only surviving daughter of Mr Hervey Preston’.

Mill Road Cemetery was closed when the three children above died, so they would have been buried in the graveyard at the church of St Andrew the Less on Newmarket Road, Cambridge.