The kerb stones are broken and the inscription difficult to read.

John was a grocer and the family lived at 106/107 King Street where he had a shop. By 1911 they moved to live at 21 Willis Road, and John was described as a grocer, wine and spirit merchant in the census of that year. Hattie died at Willis Road at the age of 87. 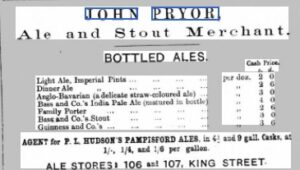 John was the son of fishmonger/game dealer James Pryor and Esther (née Deen). He grew up on Petty Cury where his father had a shop. In 1871 he was managing a shop in Bishopgate, London and after marrying Hattie Dixon ran his own store on King Street. In September 1901 he applied for a license to sell liquers and at the magistrate’s court said ‘he had frequently been asked for liquers by his University customers’. John died at Willis Road in March 1937.

John’s brother James Valentine Pryor ran the family fish business on Petty Cury, and his brother William was an ironmonger in the town.