James Rattee (1820-1855) was a highly skilled woodcarver and stonemason whose work can be seen in the chapels of Jesus and Magdalene Colleges and the Round Church in Cambridge, as well as in Ely Cathedral, Westminster Abbey and Eton College chapel.

He was born in Fundenhall, Norfolk in 1820, and learnt his trade as an apprentice to a Norwich carpenter, who also taught him carving. Early in life, he showed an interest in church ornamentation and restoration and first met George Kett while the latter was working on the restoration of Norwich Cathedral in the 1830s.
James Rattee moved to Cambridge in 1842, and set up as a woodcarver on Sidney Street. His reputation as a craftsman grew swiftly and his successes included the carving of the choir stalls in Ely Cathedral, hailed as ‘the most elaborate piece of art workmanship executed since the Reformation’.

He took the lease on a prime business site at the corner of ‘a little lane leading to nowhere’, which became Station Road when the railway was built in 1848. To expand the business, he asked George Kett to join him as partner. Their company was originally called the Wood and Stone Carving Works, Cambridge, though its name was soon changed to Rattee & Kett. The company developed the premises on Station Road into offices, stone works, a joinery and a builder’s yard, all of which adjoined Poplar Cottage, James Rattee’s home on the corner of Station Road and Hills Road.

James Rattee was dedicated to his work, and his health was not good. In 1852, his doctor advised him to take a break and he travelled to the Continent. While there, he spent time studying with master carvers in Cologne, Hamburg and Antwerp. On his return, he constructed George Gilbert Scott’s design for the five-panelled reredos at Ely Cathedral. In 1855, he suddenly fell ill with a cold and, already weak, was unable to fight the infection. Forty-eight hours later, he died at his home in Hills Road. He was buried in Mill Road Cemetery on the afternoon of Good Friday, 1855, with a huge crowd in attendance, who came to ‘evince their admiration of his abilities and respect for his character’. He was 34. His widow Caroline Rattee retained a share and interest in the business of Rattee & Kett until her death in 1866. She is also buried in the tomb, as is James Rattee’s mother.

James Rattee’s monument is one of the most beautiful in the cemetery. It was carved by Rattee & Kett in Ketton limestone, with a double-arched canopy with crocketed finials and embattled cresting. The sexfoil arches are set below quatrefoils within gables. There are inscription panels engraved in black and red Gothic letters, about James Rattee and other members of the family.

The limestone monument was cleaned and restored by Rattee & Kett (part of the Mowlem Group since 1926) using bristle brushes and water, so as not to lose the natural patina of ageing. Open joints were repointed with lime mortar, loose ornamentation was re-attached using stainless steel armatures, and a biocide was applied to protect the stone and prevent future colonisation by lichen and other plants. 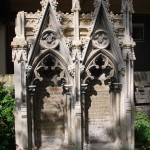