This monument was not documented by CFHS as it was a small headstone broken into many pieces. It was found and pieced together in 2014 by the stonemason restoring a grave in the parish of Holy Sepulchre. He was looking for the missing section of a cross (which he did not find). Research found that the grave was in the neighbouring parish of St Mary the Great but, as we did not know where, the stones were left on the edge of the parish.  However, a year later when we were mapping the parish of St Mary the Great the plinth was found. In 2016 the great grandson of James White Robinson shared his family story.

The stones have now been placed by the plinth, to the east of the east path, in the parish area of St Mary the Great.

Alice was born in Bishops Stortford Hertfordshire. When she died, at the age of 43, she was living in the family home at 23 Market Hill, Cambridge.

Born to James, a tailor, and Elisabeth (née White), in Slaughterhouse Lane (now Corn Exchange Street), Cambridge.  James became a shoemaker. He married Susanna Gostling on 25 December 1845 in the parish church of All Saints, St John’s Street, Cambridge (this church was demolished in the 1860s and is now the site of a public garden). In 1848 Susanna gave birth to a daughter Jane Elizabeth who died the following year aged just 10 months. Three months later Susanna died at the age of 25. They are both buried in the parish of St Andrew the Great but no memorial has been found. At this time the family were living in Corn Exchange Street. James married Alice Allen in 1851 and the couple continued to live in Corn Exchange Street or possibly Corn Exchange Court until the birth of their first son Allan James (1852). Their first daughter Alice was born in Brunswick Walk (1853) and when William was baptised in 1857, the family had moved to St Mary’s Lane.

By the 1871 census the family were living at 23 Market Hill and James was now a shoe manufacturer. His son William took over the shop and lived there with his wife Emma . The family also ran a shoe stall on the market for many years. 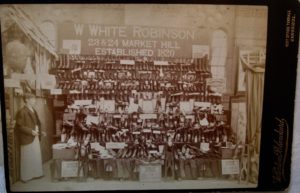 After the death of Alice James married Elizabeth Binge V11 on 17th November 1873 in Kensington, London. They had at least nine children. The first three being baptised in St Lukes Church, Chesterton when the family were living in Benson Street. In 1881 they were living in Over, Cambridgeshire but by 1891 they were back in Cambridge at 5 Mill Road. When James died, his address was given as 5 Pulling Terrace, Mill Road. Three of his daughters from his first marriage (one living on private means and the other two working as schoolteachers) were living over Mill Road bridge, in Argyle Street.

Some descendants continued to live in the Cambridge area. His son Ralph served in the 7th Dragoon Guards before and during WWI.  After leaving the army he lived for a while in Selby, Yorkshire, where he met and married his wife. They then moved back to Cambridge and Ralph had a grocers shop on Newmarket Road.

Other descendants are to be found across the UK and as far away as New Zealand.

James’ uncles Robert and William White are buried in the parish of Holy Trinity.

by Mary Naylor and Ralph White-Robinson
(Anyone wishing to contact Ralph may do so through us at Friendsofmillroadcemetery@gmail.com)