This headstone, in the parish area of All Saints, is located on the west of the western path. It is in good condition but the lettering has eroded and is not easy to read. 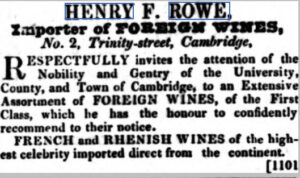 Henry was a wine merchant and hosier and ran a shop from 2 Trinity Street and later at 27 Trinity Street (1847 onwards).He died at home and was buried on 26 December.

Caroline was baptised at All Saints’ Church on 28 July 1833 and died just before her second birthday.

Henry married his first cousin Emily Fentiman (1830-1911) on 12 October 1854 at All Saints’ Church.  The couple sailed to Australia on the Orwell ship soon after the wedding  where Henry was to take up the position  of Professor of Classics at  newly built Melbourne University.  The Cambridge Independent Press reported that he had ‘arrived at that colony in perfect safety and after a very quick passage of 74 days’.  Though according to later reports Henry apparently arrived in Australia ‘in a debilitated condition of health (partly constitutional, but much strengthened by the continued effects of sea sickness during the passage)’.  Henry and Emily arrived not knowing anyone and took at house at Wellington Terrace in the city.  He died in Melbourne about a month after his arrival ‘after a few days’ illness…..over exertion having brought on an (sic) haemorrhage of the lungs’.

Emily was said to be ‘disconsolate’ and returned to Cambridge.  The Cambridge Independent Press reported that Henry was  ‘an accomplished scholar and had won considerable distinction for so young a man in the Schools at home’ and that ‘his earthly career which has been one of eminent success, his commanding talents having placed him in an elevated position in society, with handsome emolument has been suddenly terminated by the inscrutable hand of Providence, while with health a long life of usefulness and honour appeared to lie open before him’.

He was interred at the New Cemetery in Melbourne and remembered at Mill Road Cemetery.

Anne was born in Perthshire and after being widowed ran the shop at Sidney Street. In 1861 she was employing 4 men and 1 boy in the business and died at Sidney Street aged 65 years old.