Monument
On the edge of the centre circle in the southern section of the parish. Although the cross has fallen the inscription is intact. As the plinth is partially covered in ivy we were not able to see if there was an inscription for Amelia. We know she was buried here because we have the grave register for this parish.

By 1890 he was running an eponymous store at 15 Petty Cury.  An advert placed in September 1891 read ‘George Stace Ladies’ tailor, milliner, mantle and cloak makers has pleasure in announcing his early show of high class Autumn Novelties and invites inspection. George Stace having secured extensive workrooms adjoining his present premises has added Dressmaking to his other departments…sealskin jackets and furs of all descriptions cleaned and re-modelled’.  A later newspaper advert from January 1899 read that ‘sale of autumn and winter goods is now proceeding. Dresses, mantles, jackets, furs, etc etc at greatly lessened prices’. 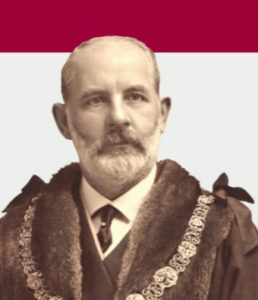 He represented Market ward on the Council from 1893 onwards. In October 1894 he placed a newspaper article seeking re election  for the ward which read ‘although a young member of the Council I am serving on some of its most important Committees amongst which are the Finance, Lease and Library Committees. Should it be your pleasure to re-elect me my best efforts shall be given to promote the interests of the Borough. I am, Ladies and Gentlemen Your obedient Servant, George Stace’. He also sat as a magistrate (1908 onwards) and was Mayor of Cambridge for two terms (1906-1907 and 1910-1911).  George and Amelia embraced being Mayor and Mayoress with great zeal and were said to have attended every social function they possibly could.  When the Esperanto Congress visited Cambridge they even learnt enough of the language to address the opening and exchange social courtesies with the attendees.  George was said to have been a very popular Mayor, and his second term fell in the coronation year of King George V – he attended the Coronation at Westminster Abbey representing Cambridgeshire. One of his key achievements during his second term was establishing the Cambridge Society for the Blind Aid – both George and Amelia were very passionate about the cause for the rest of their lives.

He was said to be a ‘staunch churchman’ and was senior churchwarden of St Andrew the Great for many years. He apparently believed that ‘a Christian home and a Christian example’ was the best way to show the  power of Christianity rather than just attending church services.  One lovely story of him said ‘Mr Stace was often seen at his best with children. He himself had the tenderness of a little child for he loved their tender innocence…he often acted in the role of Santa Claus at children’s parties and though he caused great delight to the young people present yet no child enjoyed the fun more than Mr Stace himself.’

The shop continued to be based at 13-15 Petty Cury, but the family lived at 59 Chesterton Road (1901) and then at Heathfield, 44 Parkside.  In June 1918 he was absent from a fundraising afternoon for the Additional Curate’s Society which was held at his home.  The meeting was opened by the Rural Dean who expressed his sadness that George Stace was absent due to ‘serious illness’ – he was in a hostel in London being treated by London doctors.  On 28 June the Cambridge Independent Press reported ‘Alderman George Stace is so much better that he was able to be brought home to Cambridge on Wednesday evening.  He is still very weak however and will not be able to see visitors for a few days at least’.  He issued a statement on Armistice Day in his role as Leader of the Conservative Party which read ‘I thank God that I am permitted to see this glorious day of victory secured by the devotion and endurance of our brave men and women. I hope our rejoicings though heartfelt may be in moderation always respecting the sad thoughts of the bereaved ones and that the home-comers may find happiness and prosperity’. George died at Heathfield aged 66 years old. He had been ill for nearly two years

The Cambridge Independent Press published an obituary on 29 November which said that ‘those who knew him best were inclined to believe that the war had had a great influence on his health…he said quite plainly that this terrible war was destroying all his pleasure in life’.  Whilst he was in London an air raid took place very close to where he was staying  which the newspaper claimed ‘had a considerable effect upon his nervous system’.  He was said to have got slightly stronger in June, but he suffered several relapses before dying in November.

George was said to be have been ‘always cheery, kindly and good-tempered, he was courteous, considerate and obliging to all.  He always greeting one with a kind word and a friendly smile and the rusty hinges of life seemed to creak less loudly in his presence’.

Amelia was the daughter of Charles and Susan Groves. She was born in Newmarket and grew up at Clarendon Street and 18 Earl Street. She married George Stace when she was 26 years old.

Special mention of Amelia was made in George’s obituary, where they noted ‘her kindness of heart, public spirit, organising ability, combined with resourcefulness, ingenuity and untiring energy’. She was said to have ‘been engaged in good works ..during the whole of her married life..and since the war she has been extremely busy’. After she was widowed she lived at Heathfield until at least 1920 and then moved to 20 Lensfield Road. She died there aged 78 years old.

George and Amelia’s son George Groves Stace, is buried in the north section of the parish. He died in Brighton.

George Stace outfitters continued to trade using the same name, and was still in Petty Cury in 1939.