The cross, in the parish area of St Bene’t, is well preserved and the kerb stones intact. It is not known where the small stone marking May’s grave should be placed. It was found leaning against the cross of her elder brother’s grave which is directly behind this one.

“I have redeemed thee, thou art mine.”

“safe in the arms of Jesus”

Joshua ran the eponymous clothing store at 58-60 Sidney Street with a further shoe/boot shop at Market Street.  The couple lived at 6 Trumpington Street (1881), Milton Road (1891) and then at Saxon Barns, 43 Grange Road from at least 1901 onwards.  Mary died at the family home aged 73 years old and was buried at Mill Road Cemetery on 2 July.  A service was held at Holy Trinity Church before a committal service at the Cemetery.  Mary’s nurse Sister Drake attended the service, suggesting she had been ill for some time.

Joshua was the eldest child of Joshua and Ann (née Ground). He was born in Hackney but brought up in Ely where his father kept a clothing shop/outfitters.

The store in Sidney Street was opened in  April 1862.  The store was called Joshua Taylor, and was probably owned by his father (1822-1867) as Joshua had only just turned 18 years old.  Advertisements announced ‘Joshua Taylor tailor, clothier, hatter, hosier and general outfitter, respectfully informs the inhabitants of Cambridge and its vicinity that he will shortly re-open …with an entire new stock…Joshua Taylor will be assisted in the business by a gentleman of twenty years’ practical experience in the trade, when he hopes by strict attention to business to merit a share of that patronage so liberally bestowed upon the family for the last fifty years’.  The store expanded over the years to be located at 39 and 58-60 Sidney Street and Market Street. 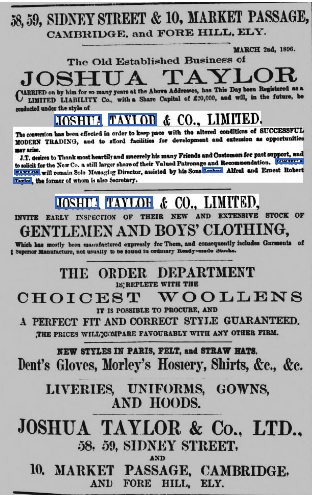 In March 1896 the company was changed to a limited company with Joshua as its Managing Director and sons Joshua Alfred and Ernest as Directors.

Joshua was an alderman of the town and also a magistrate. He died at home aged 76 years old and was buried at Mill Road Cemetery on 29 November.

Ernest worked in the family clothing business, and was a joint director with his brother Joshua Samuel. Aged 36 (1911) he was living at home with his parents at Saxon Barns. He married Elizabeth (c.1874-) and they had one son: John Taverner (c.1914-). The family lived at Hilary House, Storey’s Way, and Ernest died there aged 55 years old.

Elizabeth was the eldest daughter of Joshua and Mary Taylor. She was baptised on 8 April 1870, and lived with her parents at Saxon Barns. After their deaths she went to live at 109 Barton Road in Newnham.  In 1939 she was living at Barton Road with her sister Mary, brother in law Wilfred Gait and domestic servant Ethel Neve. On the records of 1939 she is documented as being a Director of Joshua Taylor, men’s outfitters.  Elizabeth was still at Barton Road in 1950, but died at the Evelyn Nursing Home aged 80 years old.

May was Joshua and Mary’s youngest child and died at 6 Trumpington Street aged 2 years old.

by Claire Martinsen and Mary Naylor