Henry ran a currier business in the town (which he later ran in partnership with his sons Henry and Charles) and is thought to have supplied  shoemakers with the leather they required.  He was involved in a dispute with John Feaks in 1833.  Feaks was a shoemaker who had retired in 1827 and had passed the business to his son John Shallow Feaks.  John (Jnr) had gone into bankruptcy which his father blamed on ‘a system engendered by a purse-proud monopoly.’  John (Snr) felt obliged to go back into business in order to ‘protect his son and large family who are threatened to become the innocent victims of an unfeeling and arbitrary persecution (at the head of which is Mr. Henry Balls who during a  period of some years received many thousand of pounds of the said John Shallow Feaks for leather sold at enormous high prices’. John (Snr) felt that Henry had tried to sabotage his new business by taking out advertisements, and producing placards entitled ‘caution’.  As a result he too took out advertisements in the local newspapers to assure the public that his new venture was separate to the one which had gone into bankruptcy.

In 1839 he was living at Panton House, Panton Street and in 1851 at Union Road with granddaughter Elizabeth, two housemaids and a groom.  By 1851 he had retired from the business, which he had passed to his son Charles. By 1861 he had moved to 16 Panton Street, with granddaughters Elizabeth and Catherine and two domestic servants. He died at home aged 90 years old.

Elizabeth married Henry Balls when she was 25 years old and was buried at St. Botolph’s Church on 16 May 1833. 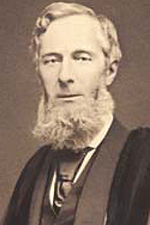 Charles also worked as a currier in partnership with his father and brother Henry (Jnr) and ran the business until c.1872.  In 1841 and 1851 he was living with his family at Trumpington Street and by 1851 was employing 6 men in the business. They  went to live at Panton House (1860-c.1871)  on the corner of Union Road and Panton Street – this later became the site of the Perse School for Girls. 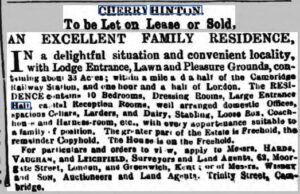 It is thought that Charles and his family moved to live at Cherry Hinton Hall around 1871/1872.  It had been offered for sale in August 1870 as a ten bedroomed residence situated in 33 acres and ‘suitable to a family of position’.  The Charles  lived at the Hall with his four unmarried daughters after he was widowed and then moved to Warkworth Lodge on Warkworth Street (c.1888 onwards).

Charles played a huge role in town affairs – as a politician, town councillor, member of the Improvement Commission and leader of the Conservative party in Cambridge.  He was said to have been instrumental in the forming of the Cambrige Volunteer force and the Royal Albert Benevolent Homes on Hills Road.  Indeed he laid the foundation stone of the Royal Albert Homes on 28 June 1859.  He served forty years as a Magistrate and Justice of the Peace and also served as Deputy-Lieutenant of Cambridgeshire (1881)

He was a founding director of the Cambridge Waterworks which opened their first pump in October 1855. It is thought that this venture brought Charles great wealth.  The census of 1881 described him as a ‘cashier savings bank’ suggesting his business interests were wide ranging.

He served two terms as Mayor of Cambridge:1858-1859 and 1869-1870.  In November 1859 there was political disrest when the Whig party voted to prevent him from being elected as an Alderman, which was the usual honour offered to an ex-Mayor. Newspapers reported that ‘a gross insult was offered to Mr. Balls and he and the whole town felt it and resented it’.  As a result he did not attend the dinner at the Lion Hotel which was to have been held in his honour at the end of his term as mayor.  Instead he and some political allies had an alternative dinner at the Eagle on Benet Street. The dinner at the Lion went ahead without the chief guest. He was subsequently presented with a Testimonial in June 1860   in recognition of ‘the honest, energetic and thoroughly English manner in which he discharged the duties’ of Mayor.  He was given an engraved gift of a ‘handsome silver epérgne (table centrepiece) with three branches representing the stem and tendrils of the vine…with a base supporting a beautifully modelled group of two children playing with a goat’. The fairly long report of the Testimonial presentation in the Cambridge Chronicle and Journal ended with ‘the whole proceeding was of a private character and therefore we do not think it right to give any detailed report of it’.   Charles did later serve a second term as Mayor and was subsequently elected an Alderman of Cambridge.

Charles was ill for a few weeks before he died aged 82.  On 11 November newspapers  printed an update on his health: ‘Illness of Alderman Balls – we regret to state that Mr. Balls who has been confined to his house for some days past, still lies in a precarious state. The bulletin issued this morning was as follows- ‘Mr Balls has had a restless night and is not better’. He died at Warkworth Lodge  and the funeral took place on Thursday 17 November.

The Cambridge Chronicle and Journal printed an obituary which said: ‘as a youth he exhibited the qualities of one destined to take a leading part in all affairs, and this early promise was more than fulfilled during the many years he was permitted to dwell amongst us. Indeed there are few men in Cambridge who have taken such an active share in public work’. They also reported that ‘he was a warm friend and naturally of a most genial disposition and his death has created a vacancy in our municipal and commercial ranks which it will be had indeed for us adequately to fill. Few men have done more to make Cambridge what she is at the present day and few have worked in a more single-hearted fashion for the welfare of the general community’.

The Cambridge Independent Press in their obituary said that he was ‘a man of pronounced opinions he was not afriad of expressing them in public or private. Not seldom has he spoken very strongly on public questions, and thereby offended  many of his friends. He cared not for commendation nor for criticism and once convinced he never swerved from what he conceived to be his duty.  Oftentimes moved to pity with the cases brought before him as a Magistrate, he was stern and unmerciful in dealing with old offenders, and with those who seriously broke the law’.

Charles was the eldest son of Charles and Eliza and was baptised on 12 November 1845. He went to Oakham School and then became a solicitor.  In July 1868 he was living in Louth, Lincolnshire and was an articled clerk. He died in Weymouth of heart disease aged 31 years old.

Eliza lived at the family home and did not marry. After her father’s death she went to live at  St Cyprian’s, 137 Chesterton Road  with her sisters Flora and Emily.  She died at home aged 49 years old after what newspapers called a ‘long illness’.

Flora also did not marry and lived at the family home and then at Chesterton Road with her sisters.  She died at home aged 87 years old.

Emily lived with her sisters and after Flora’s death moved to 1 Park Parade (1930).   In 1939 she was living at 12 Park Parade which appears to have been some form of old people’s home run by nurse Florence Stock, and where 14 older people were living together.  Emily died at Park Parade aged 97 years old.