CFHS code : AG40 This is the west face of a double sided headstone the east face is coded AG12

“In Thy presence is fullness of God”

“He bringeth them to the haven where they would be”

Francis was born in Bury St. Edmunds and was the son of James Spicer Banyard and his wife Catherine (née Hirst) . Francis was a tobacco manufacturer and the family lived initially in Bury St. Edmunds where Francis was baptised on 20 August 1852.  By at least 1861 they had moved to live at 70 Bridge Street, and Francis and his elder brother Edward both entered the family business.  They were still at Bridge Street in 1871, but had moved to live at 38 New Square by 1881.

Francis died at the Priory Nursing Home after a short illness lasting about four or five weeks. He was 61 years old. 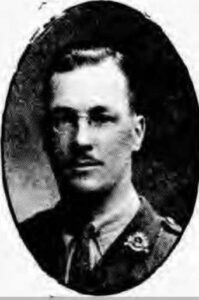 ames was the second son of Francis and Lottie Banyard and  went to the Perse School in Cambridge. He went up to Christ’s College and was then articled as a solicitor to local law firm Whitehead and Todd.  After qualifying he practiced in Birmingham and Leyburn in Yorkshire.  James served as a 2nd Lieutenant in the 3rd Battalion, Bedfordshire Regiment and died at the front in September 1916 aged 29 years old.  He was buried in France and his name appears on the war memorial at Thiepval.