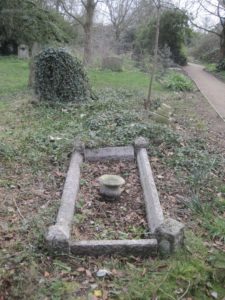 Located 3 rows from the central path and north of the south path. Some of the stones have separated.

William was born in Carlisle and was the son of Andrew and Isabella Brown. He grew up in nearby Annan, where his father was a watchmaker/jeweller. Aged 20 William was living at home and working as a draper’s assistant before moving to London where he worked at Marylebone Lane.  The business he worked for was located at 2-24 Marylebone and was employing just under 200 draper’s assistants in 1891 – it is not sure what the store  was called however.

Agnes was born in Aberdeen and grew up there with her parents William and Agnes (née Roy).  William worked as a clerk for H.M. Customs and the family lived at 3 Mitchell Place (1871) and 159 Crown Street (1881). By 1891 her parents had moved to live at 65 Tollington Park, Islington and Agnes was working as a ‘scotch wool shop keeper’, before marrying William Brown in 1896. In 1939 she was living with her eldest daughter Isabella and son in law Leslie McWilliam Leman in Wandsworth. She died at Hurst Park Avenue in Cambridge, the home of her daughter Emily and son in law Edmund Kunish.