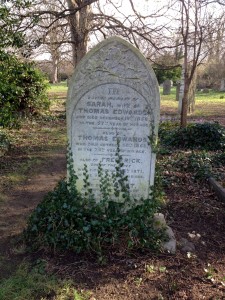 This headstone, in the parish area of Holy Trinity, is located on the east central path walking north. Although still a handsome monument the photo on the right, taken in 2016, shows that the side pillars and curved top they supported have fallen.

“For ever with the lord”

Thomas was born in Chatteris and came to Cambridge as a young man to work as a cabinet maker. He had premises at 10 Market Street. By 1839 he was also a paper hanger/decorator and it was this business that he expanded and continued till his death at the age of 74.

Edward and Sarah married in St Clement’s Church, Cambridge on December 12th 1817. They lived in King Street, Sussex Street and Hobson Street before finally settling in Market Street. They had twelve children, six of whom are also buried here. Five children died before Mill Road Cemetery was opened and are presumably  buried in the city churchyard of Holy Trinity. George, their third child, became a soldier and died in the Crimea in 1855. He sent this letter shortly before he died.  George Edwards’ letter

None of the children of Sarah and Thomas married. The census records suggest that the whole family were involved in the business.

Frederick became a painter but died in Fulbourn Hospital in his early 30s.

When she died at the age of 61, Harriet was living at the family home in Market Street, Cambridge.

The business was carried on by Henry at the same address, trading as H Edwards and Co, until Henry died in 1893.

Following the closure of the business the premises were taken over by Eaden Lilley, who already operated from the shop next door.

Sophia was living at The Causeway (Maids Causeway, Cambridge) when she died at the age of 63.

Fanny died at the age of 73 and was living at 64 Maids Causeway, Cambridge.

Caroline died at 32 Maids Causeway,  Cambridge. She was 73. In her will she left £500 to place a stained glass window in Holy Trinity church.

by Mary Naylor from information received from Dave Edwards