‘Father I will that they also

whom thou hast given me be with

he where I am that they may 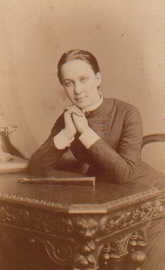 Julia was born in  Southampton and was the daughter of Charles and Sarah Ann Wheeler.  Her father was a plasterer, and she had two siblings Ann Louisa (1847-1908) who was known as ‘Lou’ and Charles Walter (1848-1925).

She married Frederick Ezekial Wicks on November 10 1884 at Cambridge Register Office without a licence. Frederick was a draper, who had been born in Essex, but moved to Cambridge in his early 20s. He was 27 when he married Julia and she was 26 years old.  They lived at 37 Regent Street and she died there aged 32 years old.  Stories passed down through the family believe that she could have died in childbirth.  If correct, the child must have died at the same time.

She left an estate valued at £12, 11s 8d.  Probate records unusually show that the executor of the will was ‘Howard William Cox, official receiver in bankruptcy’.

The Census records of 1891 show that Julia’s parents and sister Lou were all living at 37 Regent Street with Frederick, having moved from Southampton.  Frederick’s occupation was of stationer and drapers assistant, and Lou was working as a stationers assistant. Julia’s mother died in Cambridge in 1892, her father  in 1897 and  Lou in 1908.

Charles  Walter Wheeler, Julia’s brother emigrated to Australia in 1884.  The family sent photos of Julia and her gravestone to him.  Many thanks to the Wheeler descendants for the use of the images.   The date of the photo from Mill Road Cemetery is unknown.  However the photo was taken by the Cambridge photography partnership of Scott and Wilkinson, they were trading from 1885-1933. 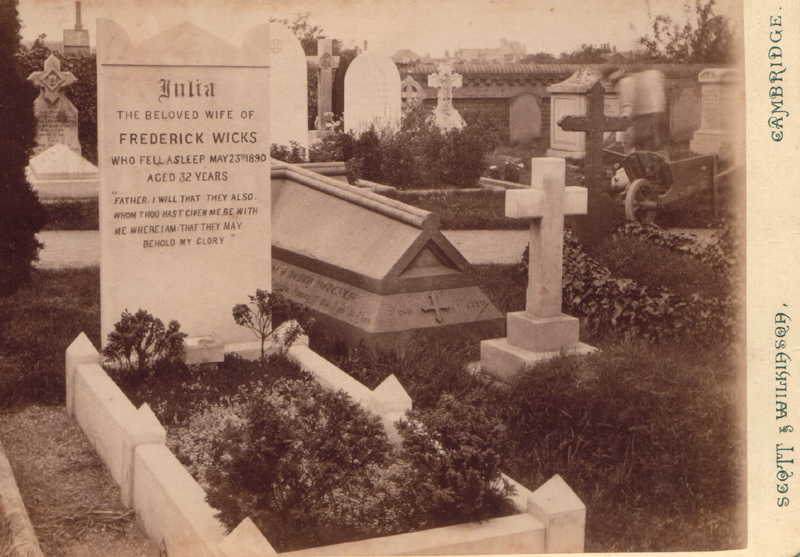