This broken cross set within kerbstones is located in the centre of the parish. Roughly 6 rows along the path that leads from the centre circle to the east path.
The inscription is now virtually illegible.

Mabel was the daughter of John and Louisa and grew up at 33 Tumpington Street.

John worked as a whitesmith and in 1888 took over a ‘perambulator and invalid carriage’ business located at 33 Trumpington Street founded by John Burford.  The family moved to live at Trumpington Street (1891/1901) and the business was named J. Ayers and Sons.  By the 1890’s they had diversified to offer cycles and cycling lessons.  Adverts promised ‘ladies and gentlemen wishing to learn to cycle will find J. Ayers and Son’s

cycle school, Mill Road, the largest and best in Cambridge where you will not be cramped for room, as it is over an acre in extent and strictly private; inspection invited’.

John retired in 1905 and the business was then run by his sons Frederick, Charles and  Arthur.  John and Louisa moved to live at East View, 27 Mackenzie Road. He died at home in February 1909, three days after his son Frederick.  His obituary read ‘he was a Liberal in politics and was an active worker in the temperance cause. He and his wife were probably the oldest Good Templars in Cambridge, joining the Order nearly 40 years ago’. His funeral took place on 1 March 1909 at Hobson Street Chapel, before interment at Mill Road Cemetery. 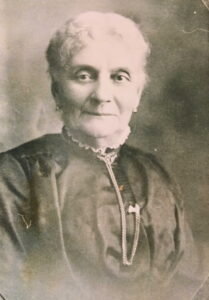 Louisa was also born in Southsea, Hampshire and married John Ayers when she was c.20 years old. After his death she lived at Makenzie Road with sons Arthur and Robert (1911) and died at home at the age of 88.

Robert was the youngest son of John and Louisa and was ‘constitutionally delicate’ due to lupus.  He died at East View, Mackenzie Road aged 31 years old.  A short obituary in the Cambridge Independent Press said he ‘will be well known to many of our readers as a frequent contributor to our correspondence columns and as a writer of light and amusing verses. He possessed considerable literary ability and frequently had articles accepted by newspapers and magazines…Mr Ayers was invarably cheerful and he will be much missed by a wide circle of friends, by whom he was regarded with affection and esteem’.

His funeral took place ‘quietly’ on 23 December. A service was held at at the Ayers family home, conducted by Rev. Harding of the Wesley Church, King Street, who also performed the last rites at the graveside.