This large chest tomb stands against the west wall in the parish of Holy Trinity. It cannot be seen from the west path but is roughly in line with the east west path that leads from the centre circle. As the monument is covered in ivy we were unable to check the inscription. 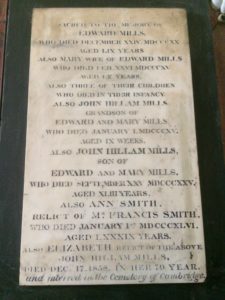 Elizabeth Mills (née Smith) (c 1780 – 1858)
Elizabeth was born on the 4th and baptised on the 30th of November 1780, in the church of St Michael, Trinity Street. She was the daughter of Francis and Ann Smith . On March 25th 1812 she married John Hillam Mills in the parish church of Holy Sepulchre, Cambridge. John was an innkeeper. Their children: Mary Ann Banks (1813), John Hillam (1814 died aged 9 weeks) and John Hillam (1816) were all born in Sidney Street and baptised in All Saints church.

Her husband John Hillam Mills died in September 1825 aged 42. In July of that year he had dissolved the partnership he held with a John Bird. They ran the Sun Inn together.  The business was in trouble. John became ill with worry and ended his own life. The address given at death was Jesus Lane. He would have been buried in the old churchyard, now All Saints Garden.
Elizabeth may have had support from John’s, or her own family, and possibly lived with her mother Ann (1841) and in 1851 described herself as a lady when living with 2 servants at a house on Regent St.
The Sun Inn was in Trinity Street and was demolished before 1866 to make way for Whewell’s Court.
Elizabeth was living in Camden Place when she died.

John was the youngest child of John & Elizabeth Mills. His father, who ran the Sun Inn, died when he was 9 years old. We do not know how the family fared but John attended St John’s College, gaining a BA in 1937. He became a well known barrister and  had rooms in the Inner Temple London and owned a substantial house “The Hill House”, in Bramford near Ipswich.

[If you have any information about this family ,  please contact us at Friendsofmillroadcemetery@gmail.com]