Percy Causton Frost (1899–1918), 2nd Lieutenant in the 10th Battalion (Shropshire & Cheshire Yeomanry) Territorial Force, the King’s (Shropshire Light Infantry), was killed in action in France on 8 September 1918, aged 19. His death is memorialized with a Commonwealth War Graves Commission headstone in the Villers-Faucon Communal Cemetery Extension in the Somme, northern France (II. A. 2). He was also commemorated on the war memorials at the Guildhall and Holy Trinity Church, Cambridge, and on his family grave in this Cemetery.

Percy was born in 1899 in Colchester, Essex. He was the youngest of three children born to Arthur Thomas Frost and Helen Frost (née Causton). During the First World War Percy became a 2nd Lieutenant in the 10th Battalion (Shropshire & Cheshire Yeomanry) Territorial Force, the King’s (Shropshire Light Infantry). He was killed in action in France on 8 September 1918, aged 19, just two months before the Armistice. He was entitled to the Victory medal and British War medal.

Percy’s older brother, Leonard, also died in the First World War. He was a pupil at the Perse School, Cambridge before becoming an insurance clerk like his father in Southend, Essex where he lived at 50 Maldon Road. He enlisted at Westminster as Rifleman (551149) in the 2/16th (County of London) Battalion (Queens Westminster Rifles). Leonard died seven months before his younger brother on 20 February 1918 in Syria. He was buried in Plot K. 62. in the Jerusalem War Cemetery. He was commemorated on the war memorials at the Guildhall, Holy Trinity Church and the Perse School, Cambridge. 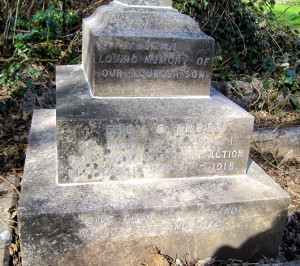 By Emma Easterbrook and Ian Bent