This headstone, in the parish area of St Paul, is showing signs of erosion.

“Thou Knowe’st ’tis common all that live must die.
Passing through nature to eternity.” 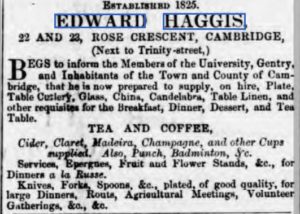 Edward worked as a college manciple (1871) and was employing 2 men in that year – a manciple bought and managed food supplies within college. He also ran a business hiring out cutlery, glass and linens which had been started by his father in 1826.  By 1881 Edward was described as a hotel keeper and university manciple, and the family were living at Rose Crescent with two domestic servants. He had taken over the running of the Hoop Hotel, Bridge Street in October 1878.  The venture into Hotel management did not last long, and by at least October 1884 the hotel was being run by new ownership.

Later Edward became butler at Pembroke College and moved to live at 35 Bateman Street. He was the St. Michael’s parish representative on the Cambridge Board of Guardians, and was a member of the Conservative party in local politics.   He died suddenly at Bateman Street and as he was not under the care of a doctor an inquest was held into the death at the Panton Arms.  It was said he went to bed as usual at 11pm but woke at 3am coughing and with a sore left arm.  Emily poulticed the arm with a mustard poultice about 5am, but Edward died suddenly a short time later.  The doctor reported that he thought Edward had suffered a heart attack and a verdict of ‘death from natural causes’ was returned.

Emily was born in Braybrooke, Northamptonshire – a village between Market Harborough and Desborough.  She was the daughter of William and Georgiana (née Kirshaw) Tebutt and was baptised in Braybrooke on 16 August 1841.  William was a farmer of 150 acres and Emily married Edward Haggis in 1866 when she was 25 years old.  She died at Bateman Street aged 58 years old.