Monument
To the south of the parish, nestled under ivy, close to the centre circle. We were not able to check the whole inscription.

Eva Emma Kerr Hills (c 1856 –  1886)
Eva was born in Camberwell, Surrey. She married Thomas at the British Embassy in Rome on February 27th 1879.
Eva gave birth to a son Cecil Hyde, who was baptised on April 11th 1886, seven days after his mother’s death. In 1901 Cecil was at boarding school in Godalming, Surrey. He went on to read Law at Corpus Christi College and then studied at Ridley Hall Theological College, Cambridge. He was ordained in 1914, married Clare Emelia Frederika Lundberg in 1917 and eventually became Archdeacon of Morocco. After his death in 1831, his intrepid wife carried on the missionary work in Morocco. 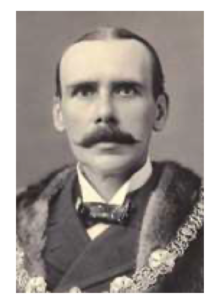 Thomas Hyde Hills J.P., M.R.C.S. Eng., L.R.C.P. Lond (1851-1902)
Thomas was born in Maidstone, Kent, the son of John, a tailor, and Frances Hills. He was brought up in Maidstone, Kent  with eight siblings.
After training at St George’s Hospital he came to Cambridge where he joined an established university and family practice. Eventually becoming a surgeon working with Hills, Wingate & Cooke whose practice was based at 60 St Andrew’s Street, 69 Bridge Street  and 17 St Peter’s Street.
He took an active part in town life as an Alderman for Castle Ward, serving on the Public Health Committee and working hard to combat TB and Diphtheria. He played an important role in the running of the sanatorium, Brookfields Hospital on Mill Road and was Mayor of Cambridge from 1894 to 1895 in which capacity he held a children’s party in the Guildhall to celebrate the new year at which his son dressed up as the mayor.
He was also president of Cambridge Cricket Association, took an interest in the New Theatre and was a freemason.

In 1898 he was called to the bedside of his nephew Edward Croft Hardy who had been injured after a bit of  horseplay in his college rooms.

Thomas died of tetanus very suddenly, aged 50. He had been working as normal on December 31st but became ill on New Years Day.
His last address was 7 St Peters Terrace Cambridge.  The funeral service was held at the church of St Mary the Great. From the account in the paper it seems that most of the borough council attended as well as several masters of colleges, and many people from the town. The reporter seemingly overcome by the occasion wrote “The congregation inside saw the coffin disappearing through the porch, through which sunbeams equal to those of a spring day were streaming”  The grave was lined with evergreens.

Catherine Isabella Hills (née Collisson) (c 1856 – 1926)
Catherine was born in Highbury, London, the daughter of Rev Matthew Anderson Collison and Jeanetta Shields Collisson. She grew up with her ten siblings at the Grange Highbury where her father was vicar of Christ Church. After her father died in 1863 the family were to be found in Grovenor Rd, Islington (1871) and Panton Street Cambridge (1881)

She married Thomas in 1887 in Kensington.

She was living at 4 Devana Terrace (not an address we recognise) when she died.