Monument : Stone cross (base only)

Monument
Located in the southern section of the parish of St Andrew the Great, a few rows from the west path. Very little of the inscription is visible. The grave register and parish register were used to complete the entry

Henry was born in Cambridge to James and Penelope Holden and baptised on March 11th 1818 at St Michael’s church. James was a tailor, and Henry followed in his father’s footsteps becoming a tailor and robemaker. He married Susan Lurcock on 31 July 1843 at St. Dunstan in the West Church in London and the couple had at least three children: Mary Maria (1844-1895), Emily (1848-) and Frederick Thomas (1854-1916).   He ran a business from 68 Regent Street and died at home aged
61 years old. 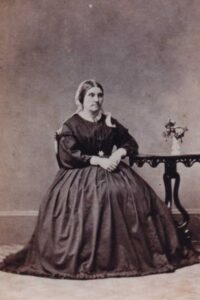 Susan was born in Cambridge and was the daughter of Thomas and Mary (née Doggett).  She was baptised the day before her marriage in 1843 at the same church. After she was widowed she continued to live at Regent Street with daughter Emily who worked as a school governess.  Susan died at home in 1895.

Mary was the eldest daughter of Henry and Susan and  married Robert Hague Ingram on 1 October 1868 at St. Andrew the Great Church. Robert was a musician/music teacher and they lived at 17 Panton Street  and then at 9 Panton Street (at least 1891 onwards). The couple had at least four children: Percival Charles Hague (1869-1904), Barbara Mary (1871-1966), Edgar Robert (1874-1931) and Dorothy Margaret (1880-1971).  Robert taught violin  from the house and daughter Barbara ran a preparatory school for girls there also. Mary died at 9 Panton Street aged 50 years old.

From newspaper reports it is known that Robert was buried with his wife.

Robert was the son of John and Amelia and was baptised on 13 February 1825 at St. Clement’s Church. He grew up at 14 Portugal Place, where his father was a tailor (1841/51) and then at Trumpington Street (1861). He was said to have shown musical talent from the age of 7 and at his first public performance was hailed as the ‘Young Paganini’.  His musical career was nearly curtailed as he crushed his left thumb aged 3 years old and his parents were advised to have  it amputated which his mother Amelia luckily rejected.  Robert worked as a teacher of music from at least 1851 onwards and lived at home  until he married aged 43 years old.

Robert played a large role in the Cambridge music scene.  He gave piano and violin lessons, was organist at St. Mary the Great for 36 years, composed music  and ‘supplied parties in town or country with Quadrille bands’.  He composed music for piano, violin and voice and wrote a Jubilee March for Queen Victoria  in 1887.  He was famous for organising a series of ‘subscription concerts’ which were held in halls such as the Guildhall and Alexandra Hall.  His 134th concert in March 1889 was reported the Cambridge Daily News who reported ‘a large number of people attended and an attractive and varied programme was gone through. Mr Ingram has wisely made a slight deviation from the previous strictly classical element. This and the introduction of vocalism have both tended to render his entertainments more popular and they certainly seem to improve as they go on’.  He also led the Church of England Young Men’s Society Band,  of which i the Cambridge Chronicle and Journal reported ‘we must not conclude without expressing a word in praise of the band, consisting of about twenty instrumentalists under the leadership of Mr. R. Hague Ingram; a more effective orchestra of the size need not be wished’ (1872).

On 19 May 1893 Robert held the last of his Concert series and the town  decided to mark the occasion with a testimonial to recognise ‘in some substantial form the long and valuable services which he has publicly rendered to Music in Cambridge for the last 50 years; during which he has always freely given his services at Concerts in aid of various Local and other Charities’.  The 147th and final concert was reported in length by the Cambridge Chronicle and Journal which said that Robert had started the series ‘when classical music was little heard, nor was Cambridge then, as now, educated up to it…Mr Ingram feels the worry and exertion of concert providing, combined with unremitting teaching of of music, too great a strain on his physical powers, and last Friday’s concert was therefore a farewell performance of this unique description’.

After he was widowed he lived at Panton Street until at least 1908, and then at 66 Norwich Street (1920). He died in Girton  of flu and was buried on what would have been his 97th birthday.