These two headstones, in the parish area of St Mary the Great, are set within one set of kerb stones, 1 row to the west of the east path. The grave was brick lined with space for 6 internments.

2 In Ever Loving Remembrance Of

Ann died at 35 Petty Cury aged 82 years old. She was buried at Mill Road Cemetery on 11 February 1901 and the survice was conducted by Rev. E. Swain from King’s College.  The Cambridge Daily News reported ‘the funeral of Mrs Ann Lupson..the loving and life-long friend and companion of Mrs Adeline Morris..took place..with every mark of sorrow from her children and grandchildren and many friends’.

NB- Ann’s son Charles Edward Lupson worked as a railway clerk and died at Petty Cury in August 1872. He was buried in the St. Mary the Great area of Mill Road Cemetery on 3 September 1872, but his grave has not yet been found.

Adeline was born in Ashwellthorpe, six miles outside Wymondham, Norfolk and baptised there on 27 May 1827.  She was the daughter of Robert and Mary Ann (née Safford) Morris and grew up in Norwich where her mother worked as matron in a charity hospital.  Robert Morris died in 1846, and  aged 23 Adeline was  working as a milliner in Norwich. 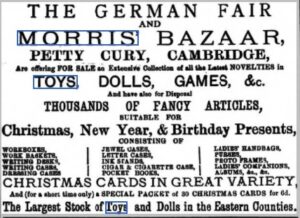 By at least 1864 she had moved to Cambridge and ran a toy shop/fancy dealer at 35 Petty Cury.  An advert placed in local newspapers in July 1864 advertised ‘large assortment of croquet games from 15s and upwards; beautiful rocking horses from 1s 6d, and every novelty of the season.  A liberal allowance to schools and sunday school treats’. In 1865 Adeline advertised that she had ‘a large stock of christmas tree ornaments…an extensive assortment of games, puzzles, work boxes, writing desks, toys and a choice variety of articles suitable for christmas presents and new year gifts; parlour croquet also the new game of parlour cricket. Country orders attended to’.

Charles was born in Ely and was the only son of Charles and Eliza Kemp.  His father worked as a University Marshall and in 1861 the family were living on Malcolm Street.  Charles worked as a library assistant in London (1871) but by 1881 had returned to Cambridge where he was college butler at Queen’s College.

He married Hannah Lupton in 1884 and they lived at 3 Petty Cury.  Charles died at home aged 61 years old and was buried on 18 March.  The first part of the service was held at Queen’s College chapel before interment at Mill Road Cemetery.

Hannah was the daughter of John and Ann Lupton andwas born in Ely. By 1871 she was working as an assitant in Adeline Morris’s toy shop on Petty Cury and continued to work throughout her marriage. After she was widowed she lived at 3 Petty Cury with three assistants and was documented as a toy dealer (1911). She died at home aged 74 years old.

Carrie was born in Lowestoft and was the daughter of Mark and Sarah (née Fuller) Benton.  She was a niece of Ann Lupton/cousin of Hannah Kemp.  She grew up in Lowestoft where her father was a joiner/carpenter and by 1881 was living at 3 Petty Cury and working in Adeline Morris’s toy shop.  Carrie died at 13 Russell Street aged 75 years old.

[If you have any information about these persons, please contact us at Friendsofmillroadcemetery@gmail.com]