Column (square-sectioned) with kerb stones, in the parish area of St Paul, beside the western path, directly across from the Cemetery Lodge.   The obelisk was damaged in 2015 and repaired in November 2016. The restoration was funded jointly by the City Council and FOMRC.

‘In fond memory of Amy Rose
beloved child of Charles & Mahala Lewis
died Dec 20th 1898 aged 3 years 9 months’
“Safe in the hands of Jesus.”
‘And of Charles Frederick Lewis
the beloved husband of Mahala Lewis
who died October 30th 1935 aged 65 years’
“Earth is not all.” 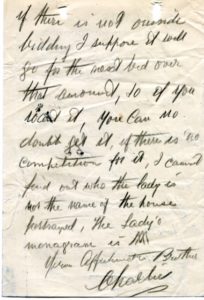 Emily was born on 21 August 1900 in Cambridge, Cambridgeshire.  She was the second of three daughters born to Charles Frederick Lewis (1871-1935) and Mahala Lewis (née Avis) (1877-1950).  She was known as Emilie.  Emilie held four diplomas: three from the Royal Academy of Music in London (teaching; vocal performance; speech) and one from the Royal College of Music (vocal performance), and was the Mackenzie School of Music’s first Principal. The School was located at the home she shared with her younger sister, Flora, at 2 Mackenzie Road, Cambridge. By 1927/28, Emilie was joint Principal with Mary Plummer, who had piano diplomas from the same colleges, but by 1929/30 Plummer was replaced by Isobel Wright, also with piano diplomas. Emilie’s sister, Flora, became ill in the late 1960s, and Emilie retired in 1968 to care for her. Neither married. Since Emilie’s retirement, the principals of the School have been Joan Appleton and Jackie Cunningham.  Emilie died on 3 September 1980 in Cambridge.

Florence was born on 1 October 1905 in Cambridge, Cambridgeshire.  She was the youngest of three daughters born to Charles Frederick Lewis (1871-1935) and Mahala Lewis (née Avis) (1877-1950).  She was known as Flora.  Flora lived at 2 Mackenzie Road, Cambridge, with her older sister, Emilie.  Flora became ill in the late 1960s and her sister, Emilie, retired from her position as Principal of the Mackenzie School of Music to look after Flora.  Flora died on 17 April 1974 in Cambridge.

Sidney is not buried in Mill Road Cemetery but the Lewis family have sent copies of letters which he wrote to his brother, Charlie between 1924 and 1937.  Sidney had men’s outfitting shops in Clapham Junction and bought significant works of art as a sideline.  Some of these are mentioned in the letters, which are written on the company correspondence book which had carbon copies.  Flo, mentioned in the letter on the right is Florence Elizabeth, Sidney’s wife.  She is the granddaughter of the pugilist Tom Cribb.