Elijah was a police constable and the family initially lived in Cheveley, just outside Newmarket. Their first  four sons were born there, and in 1881 the family were living on Cheveley Street in the village. By 1882 they had moved to live in Cherry Hinton where Elijah was the village policeman, and in 1891 were living on the High Street.   They then lived in Gamlingay for some time, before returning to live at Argyle Street (1908), 45 Broad Street (1911) and then 23 John Street (1920 onwards).

By 1911 Elijah had retired from the police – 27 years was the standard police service at that time, and afterwards he became an assistant county court bailiff. Annie died aged 75 years old

Elijah was born in Cottenham and was the son of Thomas and Mary (née Unwin) Maskell.  His father died when he was 3 years old, and aged 17 he was living with his mother who worked as a charwoman and sister Elizabeth.  At that time Elijah was working as an agricultural labourer.  He married Annie Jakes in St.Neots when he was 21 years old. 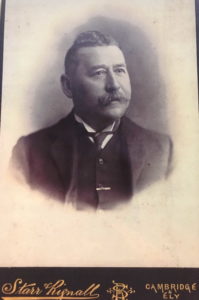 Elijah was the resident police officer in Cherry Hinton for many years and his name appeared often in newspapers of the time in relation to his work.  In August 1887 he was called to a fire which had started at the farmland of Mr T.W. Doggett.  Around 120 acres were destroyed, and a large crowd of villagers watched the blaze, which was some distance from their houses.  The iron roof of a shed had become overheated in the sun and caused the fire.  The damage caused was estimated to be £1,200-£1,500.

In July 1884 he detained John Patman on suspicion of game poaching.  He caught Patman crouching in some wheat with a net, some shot and some slugs in his possession.  Patman had resisted arrest by throwing sticks at Elijah, and when arrested said ‘I’ve got a wife and five children, and have not done no work for the last month; what am I to do? I would sooner poach than steal’.  John Patman was ordered to sell or destroy the net and pay £5 plus costs.

In 1905 when he was the police officer in Gamlingay he arrested labourer Oliver Housden on suspicion of stealing £1, 7s and 4d from blacksmith Joseph Gear.  Joseph had bought a dead rabbit from Housden, and paid him 1s and 6d for it.  But Housden had returned to the shop later, once he had seen where Joseph kept his money and had stolen his entire bag. Oliver Housden had then gone on a spending spree and had bought four of his friends to large amounts of beer at the Rising Sun pub in Potton, in addition to cigarettes, a revolver and some cartridges. Elijah had questioned Housden who had initially denied having money, but when searched money was found in his watch pocket.  Oliver Housden pleaded not guilty but was sentenced to one months imprisonment.  Joseph Gear was warned by the bench that ‘it was a pity he should buy rabbits from people who came into his shop as it was an encouragement given to poaching’.

Many thanks to WM for the family photos.