Part of the cross is still within the grave set. As the inscription on the east face is no longer legible, Ada’s name has been added after checking the grave register. 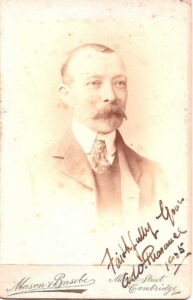 In October 1881 Alfred was summonsed to the magistrate’s court for failing to have had his daughter Emmeline vaccinated. He was charged under the Compulsory Vaccination Act 1853 – an ‘order was made and defendant undertook that the child should be vaccinated before Christmas’. The act legislated that all children should have the small pox vaccination within their first three months.

Throughout his life Albert was a chorister and was clerk of St. John’s College for over 35 years.  He was a chorister at St. John’s as a boy until his voice broke and returned to the choir aged 22 years old as a tenor.  He was also a member of the Choir Mutual Aid Society which was composed of member of Trinity, King’s and St. John’s College choirs. Albert was also connected with many musical societies within the town and sang in concerts.

Nellie Pleasance ran a Lodging House from 8 Bridge Street after she was widowed. She died in Addenbrookes Hospital aged 86 years old. 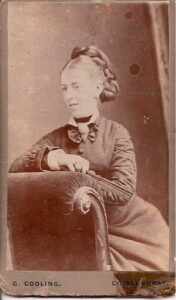 Ada was born in Chislehurst and baptised there on 8 May 1853.  S he was the daughter of Henry and Eliza Marsh and her father was a baker in the town. Aged 18 (1871) she was working as a kitchen maid at Codicote Lodge in Hitchen.  It was a large house occupied by widow Elizabeth Busk and her four daughters. They had two governesses, two footmen, a nurse, a cook, two ladies’ maids, two housemaids, a schoolroom maid and kitchen maid Ada Marsh to look after them.

Ada married Albert Pleasance when she was 24 years old and died at Bridge Street after what newspapers said was ‘a long and painful illness, aged 43. Much beloved’.