The stone is quite small and due to erosion the inscription is now very hard to read.

THE INSCRIPTION ON THIS GRAVE MONUMENT IS BEING CHECKED. IT IS BELIEVED TO BE THE GRAVE OF JOHN PLEASANCE AND HIS WIFE MARTHA [NOT ELIZABETH]

Initially the couple lived at Warwick Street with his mother Ann who ran a pub there (1841). Warwick Street ran to the east of St Mary the Great church – it was heavily impacted by a fire in the town in 1849.  By 1851 the family were living at 2 Park Street and John worked as a tailor/waistcoat maker. He died at Park Street aged 68 years old and was buried at Mill Road Cemetery on 4 February 1881.

Martha was possibly a relative of her husband John and was born in Burwell, a village between Cambridge and Newmarket. Throughout her marriage she worked as a  college bedmaker. In 1881 she was living  at Park Street with children: Charlotte, Jane and Robert, Mary Knight who was their domestic servant and grandson Charles Wallman.  By 1891 Martha had moved to live at 18 St Peter’s Street, Castle Hill with daughter Charlotte and servant Mary Knight.  She died at home aged 79 years old and was buried at Mill Road Cemetery on  3 June 1891.

Jane was baptised at All Saints’ Church on 6 January 1850 and in 1871/1881 was working as a milliner and living at home with her parents.  She had moved to live in Willesden by at least 1891 where she acted as housekeeper to her widowed sister Alice who was a school teacher.  Jane died at 2 Kempe Road in Kensal Green aged 68 years old and was buried at Mill Road Cemetery on 7 May 1913. 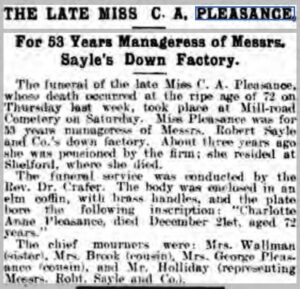 Charlotte was the eldest child of John and Martha and worked  at Robert Sayle & Co for 53 years.  On census returns she was marked as working as a furrier, which is presumably what the ‘down factory’ produced.  She lived with her mother until her death in 1891 and then lodged at Ekins Yard (1901) and 8 Haymarket Road (1911). After she retired she moved to Little Shelford and died there aged 72 years.