This headstone, located in the parish area of St Andrew the Great, stands 2 rows from the west wall towards the north of the parish. It is in very good order. In 2017 the inscription of metal letters was in perfect condition. This area is usually left to grow wild and it may now be difficult to access.

In Loving Memory of JACOB WING husband of ANNE WING who passed away Dec. 24th. 1909. Aged 72 years.
To us death shall never be anything else but the gateway to our father’s house.

Also of ERNEST CHARLES. The dearly loved son of the above who fell asleep April 30. 1923. Aged 47 years.

Also GERTRUDE ANNIE WING daughter of above who passed away April 8. 1932. Aged 52 years

The son of Charles and Mary, Jacob was raised in Worlington, near Mildenhall where his father farmed 300 acres. In 1871/1881 he was living at 12 Market Street, where he was a draper’s assistant to Henry Eaden Lilley. He married Annie Bone on 8 September 1874 at the Baptist Chapel, Brandon  and they had three children: Ernest Charles (1875-1923), Rev. Sydney Herbert (1877-1956) and Gertrude Annie (1880-1932). The family lived at 46 New Square and Jacob was documented as being a carpet warehouseman.  Middle son Sydney was a baptist minister.

Jacob was a prominent member of the passive resistance movement and was opposed to the 1902 Education Act (otherwise known as the Balfour Act).  In this act funding for schools was moved to a more uniform basis.   Previously some schools were run by local school boards, and some were run by churches (either Church of England or Catholic).  The 1902 Act established local education authorities (LEAs) who were in charge of paying school teachers and ensuring they were sufficiently qualified.  They paid the teachers in church schools, with churches providing and maintaining the school buildings and providing religious instruction.  Members of the Baptist and Methodist Churches ran a campaign of passive resistance for many years after the introduction of the Act, whereby they withheld the educational element from their taxes. They objected to their taxes being used to educate children in a religion different to their own, and were also unhappy at loosing previous involvement on the now abolished school boards. He appeared in court in 1903, 1904, 1905 and 1907 for non-payment of  tax. A report in the Cambridge Independent Press in September 1903 reported that Jacob ‘objected to pay 7s (the portion of the rate devoted for educational purposes) on conscientious grounds. He could not, he said, see his way clear to pay it’.  The court erupted into cheers after his statement.

He died at New Square on Christmas Eve 1909. 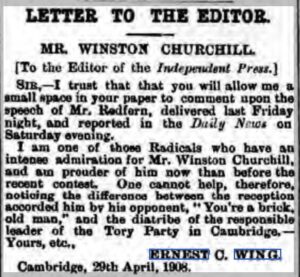 Ernest was the eldest son of Jacob and Annie Wing and attended the Higher Grade School as well as being a member of the Zion Baptist Chapel Sunday School.  He lived with his parents and worked as an insurance clerk (1901) and then as a college buttery clerk (1911). He died at home aged 47 years old.

Annie was born in Fenstanton and was the daughter of Ambrose and Charlotte (née Robinson). Ambrose Bone was a waterman, who died in 1852 so Annie grew up with her mother and step father William Fendick in Weeting, just north of Brandon, Norfolk.  She worked as a draper’s assistant at 11-14 Petty Cury (1871) before marrying Jacob Wing when she was c.25 years old. Annie died at home in December 1926.

Gertruse lived with her parents and brother at 46 New Square and was not marked as having any occupation.  She died at Fulbourn Hospital.