Herbert was born in Histon and baptised there on 24 March 1861.  He was the son of  John Ellis and Naomi (née Rook) and grew up in Histon, where his father was a shoemaker and later at the White Horse in Girton, when John became a publican. John Ellis died in 1878 and aged 20 Herbert was living with his widowed mother and working as an assistant schoolmaster. 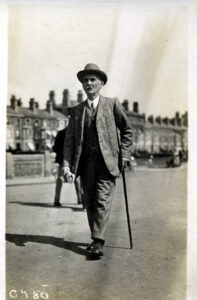 By 1911 Herbert had retired and the family went to live at 6 Devonshire Road, Cambridge. It is believed that he died at Devonshire Road aged 77 years old. Harriet was born in St. Sampson, Guernsey and was the daughter of labourer William Crewe and Mary Ann. She continued to live at 6 Devonshire Road after she was widowed and died there in August 1942.

Many thanks to the family for permission to publish these photos on the Mill Road Cemetery site.