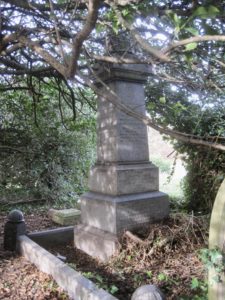 Situated in the parish area of St Paul, this is the fifth monument north of the south path and eight rows from the central path. This large column is hidden under a large holly tree.

‘In Loving Memory of ALICE SUSANNAH
the only and dearly beloved daughter of
James and Susannah Ringe died 7th Nov 1899 age 20 years.’

“Blessed be God which hath
not turned away my prayer,
Nor his mercy from me.”

Also of my dear husband JAMES RINGE Who entered into rest 5th Nov. 1914

” The Lord is my strength and and my shield. My Heart trusted in him and I am helped.”

James was the son of Nathaniel and Eliza Ringe.  He was born in Marks Tey in Essex, and his father was an agricultural labourer.  He married Susannah Gardener in Lexden, Essex in 1870. They had moved to Cambridge by 1873 as that is where their children were born.  They may have moved to Cambridge because James’ elder brother John Thomas, a railway inspector, was already living here. They lived at 24 Kingston Street [1881] and then 16 Kingston Street [1891] and finally 43 Devonshire Road [1901 onwards].  James was an engine driver on the railway.  He died at Devonshire Road in November 1914 aged 66 years old.

Susannah was born in Great Bromley in Essex and was the daughter of Stephen and Sarah Gardener.  Her father worked as an agricultural labourer. She married James Ringe when she was 19 years old.  James and Susannah had three children – all of whom died before them and are buried within the same plot at the Cemetery.

Alice was the only daughter of James and Susannah Ringe, she died aged 20 years old.

Charles was baptised on 26th January 1873 at St Paul’s Church in Cambridge.  He grew up on Kingston Street with his parents.  In 1891 he was working as a Post Office Clerk.  In the census of 1901 he was a Gunner with the Royal Artillery and at the garrison in Sheerness, Kent.  He died in Cambridge in 1904 aged 31 years old.