This cruciform coped stone is 1 row to the west of the west path close the northern border of the parish. The inscription of metal letters is mostly intact.

They later moved to 230 Mill Road, Cambridge which was run as a Post Office and Stationer’s shop.  James worked as a coachbuilder, and Laura worked as a Post Office assistant. In the 1930’s both Laura and James appear on the register of electors at 57-59 Perowne Street, although they were living at ‘St Edmunds’ in Harston.  Laura died aged 72 years old. 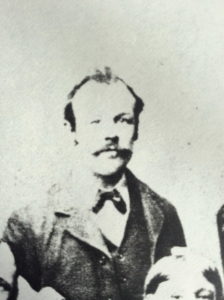 James Harold was the son of James and Laura Watts.  He died aged 6 years old in 1901.