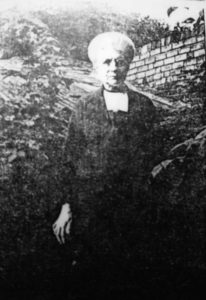 Annette is believed to be the daughter of George and Sarah (née Ball) Ingram. She was born in Mepal, and aged 16 was living  at Station Road, Haddenham and working as a nursemaid in the household of tailor Henry Porter. She married James Chamberlain Stalley (1858-1898) in 1878 – James was an agricultural labourer and later a drayman.  They had four children: Florence Louise (1878-1947), Edith Sarah (1883-1939), Ivy Violet (1899-1959) and one other unidentified child.  The couple lived in Mepal (1881) and then in Chatteris (1891).  James Stalley died in a work related accident in July 1898 – he worked for Morgan & Co Brewery and had been unloading some casks of beer when his apron got wrapped around a barrell.  He fell and the beer rolled over his leg causing damage.  He was taken to Wisbech to be cared for by Dr Mason and died there some time later.

In 1901 Annette was living with her three daughter in Wellington Street, Littleport and was working as a dressmaker. By 1911 she and Ivy had moved to Cambridge and were living at 266 Mill Road where Annette was a confectioner. She was recorded as living at 8 Willow Walk from 1915 to at least 1930, and died in 1932 aged 76 years old.

Ivy was the youngest daughter of James and Annette Stalley, and was born after her father’s death. In 1939 she was running a Lodging House at 34 Victoria Road and living with her sister Florence.  She was still resident at Victoria Road when she died in 1959, but died at Chesterton Hospital.